The families of John Young and Charles Meloy have a long history with ‘The kench’, a spit of land to the West of Hayling island which was used firstly as a base for fishing and later, with the introduction of houseboats, as a holiday destination with strong links to water based activities on the Solent and Langstone Harbour. Later the majority of these houseboats were replaced by permanent chalets which have been adapted or rebuilt over the years. John Young collaborated with Meloy Architects to realise his designs for a new Chalet on the last remaining unbuilt plot at ‘The Kench’.

This spirit of the original chalets is prevalent in the new single storey structure. The arrangement is an open plan living area with integral kitchen. There is floor to ceiling glazing offering impressive views across the Kench and north towards Langstone harbour. Two bedrooms are located to the rear of the building with a bathroom and WC ‘core’ at the centre of the plan.

The bedrooms also maintain views over the Kench through full height glazed doors.

The components of the plan are unified under a projecting canopy roof and a terraced base of the same width. The terrace is finished in timber decking made from slow growth Oregon pine. The full length boards are aligned and finished to provide a visual continuation of the internal Douglas Fir timber flooring. 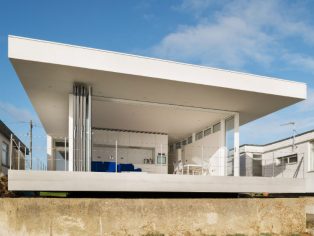