The new 1,600 seat concert hall in Malmö Live will open to the public with a festive premier program on the weekend 28-30 August 2015.

The concert hall is the Centre piece of the Malmö Live complex, which also consists of a five star Clarion Hotel, Congress Centre, two restaurant’s, sky bar and an additional flexible venue space, called the Cube. The complex designed by Schmidt Hammer Lassen architects totaling 54,000m2 opened in May of this year and is fast becoming a cultural landmark in central Malmö.

Malmo Live is situated within the Schmidt Hammer Lassen Universitetsholmen masterplan in central Malmö and appears as a clear and easily readable composition of buildings. Inside, three volumes hold a large symphony hall, a flexible hall and a conference centre, which are clearly defined elements that, through their mutual composition, set the tone for the musicality of the building. The three building masses have an almost-urban scale that supports the idea of ‘a city within the city’, which is the key design concept of the complex. The different functions of the building are organised as separate elements to resemble a small city, with the lobby becoming the street, which runs through the entire ground floor and ties everything together. 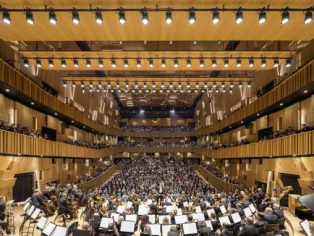