Allied Works was selected to design the National Music Centre of Canada.

following an international competition. The Centre is an entirely new cultural institution dedicated to the music of Canada in all of its forms. It is at once museum, performance hall, interactive music education center, recording studio, and broadcast center. Sited opposite the Stampede Grounds in the East Village area of Calgary, the new Centre is intended to catalyze the future development of the district. The project includes the restoration of the historic King Eddy Hotel, a legendary blues club.

The Centre is a gathering of resonant vessels that stand as sentinels to the East Village of Calgary. The building is a silent and powerful instrument that exists to emanate music and light. Six five-story towers form the body of the building; the concrete walls rise in subtle curves that merge, part and intertwine, the glazed clay surfaces modeled by light, gravity and acoustics. Entering from the street, the building is filled with the reverberation of voices and music, drawing visitors up into five floors of performance, education, and collection spaces. Apertures at each gallery create a threshold of sound, introducing the content and programs of the particular exhibition. The spaces between are filled with silence, with views that frame the city and landscape beyond. Bridging across the street and back again, the building creates a gateway for the new quarter, uniting the artists’ residences, clubs, and recording studios with the new presentation spaces. 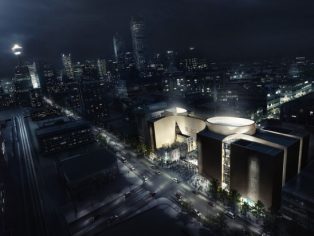