There can be no doubt that, over the past decade, zinc has captured the imagination of architects for use as a facade, rainscreen cladding and roofing material, as Jonathan Lowy from VMZINC UK explains

Pre-weathered colours, which develop the same self-protecting patina as natural zinc, have given confidence that systems retain their appearance while having a long service life and low maintenance requirements. Hundreds of diverse projects have confirmed the metal’s suitability for traditional and contemporary designs, both in new build and refurbishment situations. By comparison with other countries, however, the metal’s development here might still be described as nascent.

The UK’s widespread adoption of zinc has been driven by different factors to countries in which it has been used since the 19th century. Having been at the forefront of sustainable construction, design life value, embodied energy, environmental impact and recyclability have all combined in its favour. Zinc is considered by many to be the most sustainable of all metals but its success owes as much to the scope it provides for complex detailing. This perpetuated the creation of intricate handmade ornamental building features, the skills for which are still alive today. Such specialisation in zinc heritage work continues alongside research and development to produce new systems and colours for contemporary architecture.

The craftsmen who create handmade ornaments do so under the collective name of ‘Les Ateliers d’Art Français’. They are, in many cases, descendants of the original French zinc workers and their creations range from bullseye dormers, decorative hopper heads, cupolas and domes to decorative guttering, finials and weather vanes. Such ethereal work provides illustration of zinc’s value in conservation and restoration. Recent work to re-roof the Grade II listed Wallace Collection building in Paddington saw handmade bullseye dormers produced to enhance the roof ’s classical appearance within conservation area guidelines. They are actually used within a batten capped roof to disguise ventilation outlets.

By contrast, standing seam systems predominate in present day building envelope work. There is, however, increasing evidence of the use of interlocking, overlapping, flatlock and composite panels, honeycomb-backed cassettes and shingles. With so many architects regularly specifying zinc, a newly developed engraved finish followed input from over 400 of them. As the first such material to be introduced, its matt surface is unlike any other finish or colour and its delicate surface variation takes advantage of varying light diffraction. A new manufacturing process has enabled acids, water consumption and waste to be reduced and though the material has an uneven surface it does not support accumulation of contaminants or take fingerprints. For those seeking the sustainable benefits of zinc in a very light colour it has filled a long standing gap in the market.

The composite panel, two sheets of zinc 0.5 mm thick heat bonded either side of a mineral-rich polyethylene core, is another less well known development. It provides exceptional fire resistance in a panel which is just 4mm thick and light in weight. Lengths of up to 6,000mm can be installed in colours which now include subtle shades of green, red and blue.

Colour variation is a further facet of zinc development which is relatively little known. The soft tones are unlike those available in other metals and enable them to be used in combination to striking effect. The naturally grained texture of pre-weathered zinc remains visible as BDP’s design of the £80 million University of York campus expansion illustrates.

“Our vision was prompted by the rural surroundings and specifically by the lakeside location. We felt that the elevations should reflect colours which stemmed from flora such as bulrushes. We realised that the combination of subtle shades of grey, green and red would enable us to create a colour palette which was visually analogous to the rhythm of multistemmed plants. A particularly satisfying feature of the zinc is the crisp shadow gap that is achieved between adjacent panels. This gives the skin of the building a textured sophistication and the ability to form a continuous wrap around both the straight and curved sections of the facade.”

When considering the efficacy of zinc, what stands out is the diversity of projects in which it is being used. Schools, hospitals, apartment blocks and hotels may not resonate as commercial projects of note but all have individual aspects of design which set them apart. Others such as railway and bus stations, sports venues, retail outlets and visitor centres (such as that at Stonehenge) undoubtedly draw greater attention. Heritage projects provide a showcase for the best in handmade zinc but commercial projects are now showing just how aesthetics can combine with high performance in the modern building envelope. 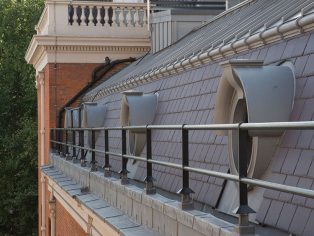