The practice works on a wide range and scale of infrastructure, urban regeneration and place making projects and is successfully exporting its experience designing some of the UK’s most significant city-shaping projects to Australia, North America and the Far East. Over the last three years international fees have grown by over 600%.

Working on Crossrail’s new Elizabeth line stations at Paddington and Woolwich has given WW+P the opportunity to compete for major projects in Australia and Canada.  As a result, the practice is currently designing and delivering five stations on the Melbourne Metro extension; a major upgrade to Sydney Metro Sydenham Station; two stations and associated urban realm on the Yonge metro line extension in Toronto and a new regional transit centre and passenger processing facility at Toronto Pearson International Airport.

These wins and others have enabled the establishment of studios in Melbourne, Sydney and most recently Toronto, and swelled staff numbers to 150.

“We are delighted to win the Queen’s Award for Enterprise, which recognises our success in designing and delivering complex city-shaping projects around the world.”

“London has led the world in gradually coaxing people out of cars and onto safe, reliable, efficient public transport, bringing with it great benefits to the environment and creating a more civilised city.  We are proud to be a part of this transformation and excited by the opportunities to demonstrate our knowledge and approach to city-shaping in growing global cities around the world.”

“Our export success shows that you don’t have to be a huge company to work and sell abroad.  If you have a specialism, if you’re expert in your field, there are great opportunities.” 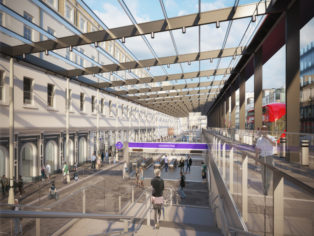