Activity in the UK housing market was frenetic in June as buyers and sellers rushed to beat the stamp duty holiday deadline. What has emerged since is an untenable disconnect between supply and demand.

Demand has outstripped supply in most parts of the UK housing market this year. Thankfully, the imbalance is likely to reach its peak this summer.

The combination of a lull following the stamp duty holiday and the summer break means one key indicator of demand reached its second-highest level in seven years in July.

The ratio of new buyers to new properties listed in the UK last month was 12.7. The figure was last higher in January 2020 (14.6), the first full month of the short-lived ‘Boris bounce’.

The UK property market should start putting the supply/demand distortions of the last 18 months behind it from the autumn, meaning this particular ratio will fall.

As supply picks up, the clamorous headlines around house prices may also recede.

We started to see signs of this last month when the Nationwide index fell back to annual growth of 10.5% from 13.4% in June.

Why should supply increase?

The first reason is the gravitational pull of demand, which has been undented by the end of the stamp duty holiday or pretty much anything else over the past year. Most prospective sellers know this but it will crystallise decision-making as people return from their summer holiday.

The number of UK exchanges in July was 21% below the five-year average, a number that is unsurprising given the scramble to complete in June.

However, the number of new prospective buyers was 42% higher than the five-year average, showing how much demand remains in the system. Meanwhile, the number of instructions to sell was down 28% over the same period, demonstrating how supply and demand headed in opposite directions in July. 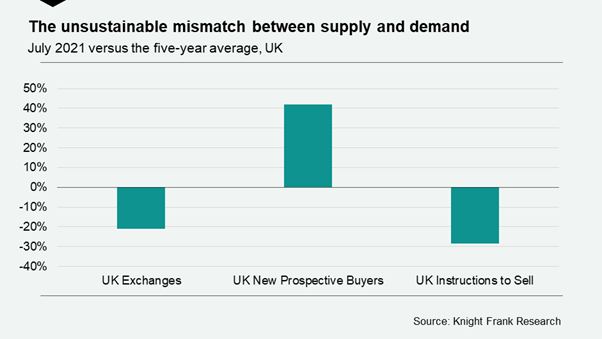 It should be short-lived. It doesn’t feel economically feasible for this mismatch to survive beyond the summer, particularly against the backdrop of low mortgage rates and a recently-upgraded IMF economic forecast for the UK.

This brings us to the second reason why supply should pick up: the creeping return of normality.

For the housing market, that means the complete end of the stamp duty holiday in September. Some sellers were been put off by the frenetic pace of activity in the first half of this year and may now decide to act.

In the real world, it means a sneaking sense that the worst of the pandemic is behind us.

The emergence of Covid variants remains outside of anyone’s control but, as it stands today, more sellers should come forward once they have taken a summer holiday if they sense Covid is moving into the rear-view mirror.

One final thought as people return home and unpack: we expect double-digit annual growth to become single-digit growth by the end of the year. Sellers may benefit from more buoyant prices if they act sooner rather than later.