Twelve Architects has been given the go ahead for a £120 million retail and leisure destination in the Russian city of Perm. This is the practice’s second major retail project in the country, following its design of the 120,000m2 VEER development in Ekaterinburg.

The 152,000 m2 development will house a retail and leisure mall, art gallery, conference centre and a 175-bed hotel. The project is the landmark development within the overall regeneration of Perm’s Kama River Promenade and central Esplanade park..

The vision for the external form is to create a distinctive identity more akin to a major public building to attract retailers and the general public, taking a lead from Perm’s culture of performing arts and civic sculptures. The façade takes inspiration from the folds of a ballerina’s skirt, recalling the period when the world-renowned Bolshoi company was based in the city. It will create a unique identity and form a piece of modern architecture that complements the historic buildings of the district.

The facade will be clad in a high performance flexible composite membrane, which is stretched over a series of modular subframes to form the outer ‘ballet’ layer. The subframes will be fixed back to the external sandwich panel wall which forms the thermal and waterproof line. This is supported by an inclined columns and concrete slab edges.

The massing has been articulated as a series of volumes, to reduce the overall scale of the ‘retail box’ and to create a scale that relates more to the existing streetscape. It provides a significant advance in the design of retail facilities in Russia, where simple, single entrance boxes are prevalent. The dynamic, multi-level form and routes through the building that relate to external pedestrian streets will give residents of and visitors to Perm an entirely new shopping and leisure experience and create a destination within the city for people to meet, shop, relax and be entertained all year round.

The development will be completed in two phases. The initial phase will see construction of the retail and leisure mall which is arranged over seven levels. Two basement levels contain car parking and perimeter retail, with the first three levels above ground housing retail. These are terraced to respond to the external site levels. A cinema, foodcourt and kidszone will be located on the fourth and fifth floors.

The art gallery will be located within the public retail galleria and externally within a linear sculpture park that reinforces the connection between the Promenade and Esplanade.

The second phase will extend the retail mall and create the new hotel which will be housed in an 87-metre tower. The location of the tower at the end of the site adjacent to the bridge that is the main route to and from the city creates a new landmark for Perm.

“Retail development in Russia is predominantly housed in very simple forms – ‘black boxes’ with single entrances – providing a functional experience for visitors. It’s exciting to be introducing new concepts to a city, giving residents something that they have never had before and we’re confident that our development will be a fantastic addition to Perm.”

The project has recently gained city building permit approval. Construction of the first phase will start during the second quarter of 2019 with completion due in the third quarter of 2021. 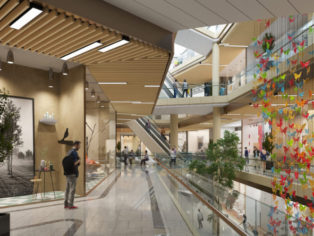 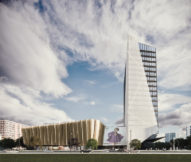