The fruits of determination

Nothing was going to stop resourceful self-builder Gill MacLeod achieving the house of her dreams, a major renovation in rural Scotland

Clambering around a delivery depot in a hi-vis vest and hard hat, clinical psychologist Dr Gill MacLeod realised that her mission to raise a new home from a cluster of tumbledown farm buildings had given her powers of determination she didn’t know she possessed.

What was she doing there? Her voice warms with passion as she recalls the story. Planning the interiors for her self-build project, she had fallen in love with some engineered wood flooring – at a cost of £63 per m2.

“It was lovely, but it was too expensive,” she explains. “So I went on the internet and ordered a similar floor for much cheaper. Then I was reading various online forums and people were saying that this particular flooring company would take your money, but send you a different floor to what you had ordered. I was really worried, because once you accepted delivery, there was no way to send it back.”

That’s how a middle-aged professional woman ended up crawling around in a delivery depot in Livingston, in a desperate search to divert an order before it was dispatched to her half-built new home, eight miles away in Linlithgow.

When Gill finally did locate her flooring, she was vindicated. It turned out to be “a cheap pinky colour, not what I’d ordered at all.” So she cancelled it forthwith, eventually received a refund and opted to buy from the Edinburgh Carpet and Flooring Warehouse instead, where she also managed to haggle her way to a super-reasonable £13 per m2 deal on the soft bleached wood flooring of her choice.

Her two-year quest to create a contemporary five-bedroomed family house on the footprint of an existing farmhouse and its surrounding byres and barns has also left Gill, 54, who works for the NHS in Scotland, with a whole new take on life.

In fact, she enjoyed the self-build experience so much, she is now working on plans to convert an outbuilding into a holiday let.

Gill freely admits that she was the driving force. Her husband, David, 52, works as a senior retail manager and travels frequently for work and her son, Ross and daughter, Anna, are away studying in Glasgow and London respectively.

“David only wanted two things, a boiling water tap and an outside fireplace!” she laughs. “Seriously, he knew I would make the right decisions, and he was happy to let me get on with it.”

During the process of rescuing Manuel Haugh – the historic name of the farmhouse, which she and David have retained – Gill says she discovered many things about herself, including a love of bargaining and an appreciation of those special companies which go the extra mile.

“If I hadn’t had my iPhone, I couldn’t have done this project,” she admits. “Although we do have good suppliers in Scotland, the choice can be limited so I did loads of research online.” Her bath came from Soakology, which is based, ironically enough, in Bath. “The guy there was so helpful on the phone. The kind of bath I wanted now sells for about £7,000, but I got it for £1,300.”

Through her architect, she also found a cabinet-maker in nearby Falkirk to build the oak staircase for less than £3,000; Gill says that she had seen similar models from specialist makers for between £15,000 and £20,000.

Although Gill had rewired, replumbed and plastered her first flat in the West End of Glasgow some years ago, and is adept at tiling and painting, the major renovation and rebuild of Manuel Haugh required professional intervention in the shape of architect Adam Toleman, founder of Falkirk architectural practice Arka Architects.

This was Gill and David’s first self-build project. “It was something I had considered but didn’t think the opportunity would arise. We weren’t actively looking. I saw the site when it was for sale on the way to visit a friend, who just lives up the road.” Then David spotted it too, and together they agree to take the plunge.

She chose Adam on the recommendation of a friend who had already used his services: “I had had a very negative previous meeting with another architect who said he “wouldn’t touch it with a barge pole” but I was determined it was happening. I loved Adam’s positivity and vision.”

As this was such a long and detailed project, it was imperative that there was a strong relationship between architect and clients. Gill and David acquired the site in January 2014, agreeing to purchase it without planning permission. “Yes, I’m the risk taker,” Gill admits. “But somehow the house just spoke to us both.”

Demolition and clearing of the site began just under a year later, after bat and bird surveys and mining reports had been carried out. Gill and David stayed in their previous house, a modern new-build on an estate, during the work. This was then sold to help fund the project, which had a build cost of £500,000: “We had no time pressure as we were able to stay in our existing home, so took time to plan and think with Adam. He encouraged a collaborative approach from the start and we had a number of planning meetings to discuss our priorities and Adam’s idea for the build.”

Planning permission was granted, with enthusiastic local support for rescuing the neglected farmstead, under the provision that the new Manuel Haugh had to retain the original footprint of the buildings. Then the build took place between January and October 2016 under a team of local contractors.

Perhaps that hapless original architect’s reluctance was understandable; the house, which takes its name from the ruined medieval Emmanuel Monastery nearby and ‘haugh’, a Scottish word for a meadow beside a river, was, in Gill’s own words, a ‘wreck’.

“Has she told you about the dilapidation of the place?” asks Adam. “The whole thing was stuffed full of old agricultural machinery, old tyres, every bit of it was rotten to the core. But as we clambered over the debris, I thought there is a double courtyard here – an idea which offered great potential – and so many buildings it was too much to convert. So my idea was to hollow out some of these buildings and leave their walls as a defining space.”

Out of this initial idea, the ‘new’ Manuel Haugh was forged; Adam undertook careful consideration of which walls to retain and which areas to extend with a combination of timber frame and steelwork, taking care to re-use materials from the original buildings whenever possible. For example, stone blocks were repurposed to help create walls. “They look like they have been there hundreds of years now,” says Gill.

He based the design around two courtyards; the first acts as the parking area, defined by the original ‘steading’ walls, outbuildings and a carport, the second is the ‘garden court’, which allows direct entry to the house.

“It was one of those projects that you smile at in the end,” says Adam. “I wanted other people to walk in and smile too. I know that sounds simple, but I wanted someone to enjoy living in what that ruin could become.”

But what a journey it was; the replacement dwelling, glistening in sharp white render and designed for easy and comfortable modern living – with a balcony on the first floor and over- sized doors to the garden – could not be more different from the crumbling pile Gill and her husband took on.

“We love the way the building gradually unfolds as you walk through the property from outside to inside,” adds Gill. “Adam was happy to incorporate all my ideas about the internal layout: I wanted to add a study, move and add windows and make sure we had all the bedrooms ensuite. We have no glass doors in the showers – they are all open stalls – so less to clean!”

The original farmhouse had a kitchen, laundry/scullery, two living rooms, a downstairs bathroom on the ground floor and two bedrooms and a box room upstairs. By embracing the footprint of some of the farm buildings, Gill and David now have a 320 m2 new home which has five bedrooms, four ensuites, a study, cloakroom, sitting room and a light and spacious open-plan kitchen/living/dining area.

The dining element is the magnificent heart of it all, and brings a real sense of grandeur to the living space; the roof rises upwards and there’s a first-floor galleried hall which looks down on the space below.

“We’re really proud of the soaring ceiling heights and the unusual asymmetrical angles visible,” says Gill. “Adam really listened to what we wanted. I asked him to add a wood store next to the fireplace and designed the kitchen myself so it sat sympathetically with the open- plan living area.”

She also loves the huge expanses of thermally-efficient glass: “Adam has given us a beautiful view from every window. I know it’s a cliché, but we do feel connected to the landscape from every single room. The view from the upstairs sitting room is particularly special.”

Manuel Haugh sits in a peaceful rural setting in a valley with beautiful views of Cockleroy – a local hill, plus a landmark railway viaduct and the surrounding farmland: “We have no neighbours, so can keep chickens and two cockerels!”

As well as setting out a distinctive design ethos, there was also much work to do to make the new home habitable.

Although water was on site, the previous occupier, who had died, lived alone and used a diesel generator for electricity. It cost Gill and David £30,000 to bring in a brand-new electricity supply under a field. Installation of services meant the juggling of priorities between cost and environmental concerns.

“We wanted a biomass boiler, and in an ideal world were intending to have one but the Government dramatically reduced the subsidies at the time we were building,” says Gill. “The outlay would have been four times the cost of an oil-fired heating system. It’s a pity there was no financial incentive for us to use an alternative of eco-friendly heating systems.”

However, because the house faces south-west and has Velux windows in the roof, it does benefit from impressive solar gain – “even though it’s Scotland!”, laughs Gill. She says that except in the depths of winter it’s usually warm enough without switching on the underfloor heating downstairs and radiators upstairs.

Their new home is a far cry from the mouldering heap of buildings that stood here just a few short years ago. “It’s hard to think now, but the farm and out-buildings were unfit for habitation,” says Gill. “Now we feel as though we are permanently in a luxury holiday home. We feel very lucky to have had this opportunity, as well as a great feeling of achievement.” 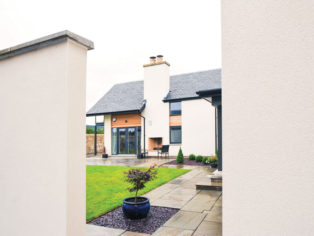