Stylish conversion of three Listed buildings are up for an award

Developer Thomas Homes, has spearheaded the restoration of the buildings on the University of Reading’s London Road Campus.

The most noteworthy among them is the Grade II* Listed St David’s Hall, built in the 1830s, which was a former hall of residence and was on Historic England’s ‘Buildings at Risk’ register. Also included are St Laurence’s Hall and St Mary’s Hall, both Grade II Listed and a further single storey building which is not Listed in its own right, but included in the curtilage of St Mary’s Hall.

The project demanded that where possible all the original single glazed timber sashes had to be retained. The planning obligations required secondary glazing to the large majority of windows in these apartments. With the windows having timber shuttered surrounds, the secondary glazing was required to sit in these reveals.

Thomas Homes sought advice from Selectaglaze to assist in reducing the external noise levels. With the Royal Berkshire Hospital, the University of Reading and the Oracle Shopping Centre all just a stone’s throw away, London Road’s busy thoroughfare would be a distraction.

Over 300 units were fitted to all three of the Listed Buildings, across all floors over a two year period. Due to the successful reduction of drafts and outside noise, Selectaglaze was recently asked to return to one of the apartments to fit more secondary glazing.

Founded in 1966, Royal Warrant holder Selectaglaze has worked on all buildings of all types from listed to traditional and even new build. The Company’s wide range of products are fully tested and certified and produced to exacting quality standards. A free technical advisory service is offered and a RIBA approved CPD is available to architects and designers. Selectaglaze will be showcasing a variety of secondary glazing products at Futurebuild from the 5th – 7th March, ExCel London at Stand D21. 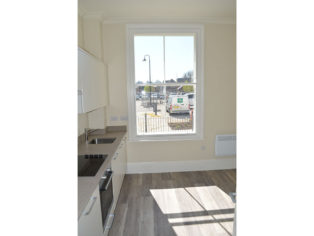