Sto has helped to create a balanced acoustic environment at the world-famous Royal Opera House in Convent Garden. The StoSilent Distance monolithic, seamless acoustic solution has been installed within the new entrance foyer and front-of-house spaces as part of the recent ‘Open Up’ refurbishment to make the Royal Opera House a more welcoming building.

“The acoustic work was part of a wider project to open up and reconfigure the main foyer areas,” comments Tom Shell from project architects Stanton Williams. “In the newly-created large, open spaces we chose to use natural materials such as stone for the flooring. Although aesthetically pleasing, this added to the acoustic challenges as it is a hard, reflective material. This meant that coping with noises such as foot traffic was a concern, and it created the need for a solution which would also accommodate other reflective materials, such as the Venetian polished plaster used on the walls.”

The decision was made to specify the StoSilent Distance lightweight, seamless, acoustic solution that lends itself perfectly to today’s cutting-edge interior designs and minimalist aesthetics. “We had used it previously and been very pleased with its ability to provide a correctly balanced acoustic environment, and also create a clean, minimalist appearance, both of which this historic arts building deserved,” adds Tom.

The opening up of the foyer area made this an acoustically-challenging project, as the foyer stretches over three floors in height, with a main escalator which has a single linear design and reaches up to the top floor area. It was decided to remove the existing metal tartan grid and install the StoSilent Distance system to the underside of this part of the building, in order to enhance the acoustics and allow the ceilings to flow seamlessly throughout the space and create a visually appealing aesthetic. This ornate but modern ceiling concept involved many design challenges, including the need to create a contemporary appearance which would complement the interior of this historic building.

The StoSilent Distance boards were installed onto a Sto SC400 grid system, which allows for movement with the building, therefore limiting the possibility of damage to the exterior finish at wall junctions and other detail areas. The boards also resist pattern staining and will maintain the desired monolithic, seamless appearance.

“Installing the suspended StoSilent Distance system was a complex operation that required close attention to the finer details which would allow the scheme to succeed both acoustically and visually,” explains Chris Jones of Wigan-based Ceilings and Partitions, a Sto authorized applicator. “We had to work with quite a number of other trades, especially when it came to integrating a number of glass reinforced gypsum mouldings into the Sto system. The architects had commissioned a bespoke lighting system to be installed within these elements, and creating the correct relationship between the mouldings and the Sto system was critical.

“Sto ensured that everything flowed smoothly right from the outset. We knew they would provide any assistance we required, including advice on the design and on-site support during the project installation. Another benefit was the pre-start meeting with the main contractor and other trades involved, which helped inform everyone about the system. This greatly assisted with the scheduling of the other works.”

For this project the StoSilent Distance system, which can easily be maintained and seamlessly repaired if required, was finished with StoSilent Décor M. This specially-formulated and spray-applied glass silicate acoustic plaster has a granular texture which provides a high degree of light resolution, and creates a visually-attractive surface. It can be tinted to match a wide range of RAL colours and shades from the StoColor system.

People in the new spaces can now hold conversations without the need to shout, and there is a greatly reduced risk of the Lombard effect which causes people within large open areas to speak louder in order to be heard.

Poor acoustics are counter-productive, can make space unusable, and over time can even induce health problems. The StoSilent Distance system helps create properly balanced acoustics while taking into consideration the requirements of the individual space, and countering the combined concerns of attenuation, reverberation, speech clarity and foot traffic noise. 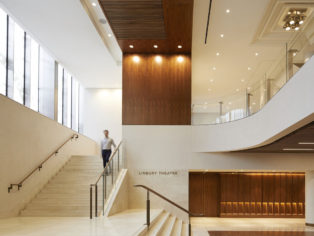