Construction started on Staromestska, a bold addition to Bratislava

Construction has started on this bold addition to Bratislava’s urban centre, which creates valuable external amenity spaces providing spectacular views out over the historic town centre.

This 10,200 m² commercial office scheme for CRESCO GROUP was won through an invited competition in September 2012.

The building’s facade is set back at ground level to enhance the public realm, creating a partially sheltered pedestrian route and an immediate social interface, with the main entrance situated at the most prominent corner point of the building. The facade is a panellised system to correspond with the internal office planning grid, with vertical fins acting as shading elements, whilst at the same time responding to the solid articulation of the adjacent Supreme Court building.

Responding to the local urban context, whilst maximising floor plate efficiencies, the scheme will accommodate either a single occupant or multiple tenants. The proposal takes the form of an urban infill which completes the missing corner of a city block – a rare opportunity within Bratislava’s historical city centre.

The building form is simple and efficient, the “bull nose” rounded corners in plan creating a distinctive character within the urban grain, offering impressive views, whilst minimising the loss of natural daylight to neighbouring buildings. The top floor is set back in response to the height and massing of adjacent developments.

Staromestska is one of several projects by the practice in Bratislava, including a mixed use scheme, a residential apartment project and a senior school. 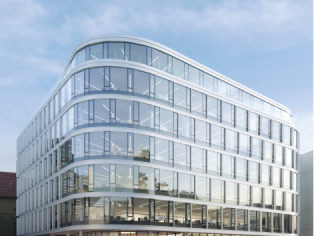