What better way to take in the beauty of the Channel seascape than from the top of a coastal tower, perched on a rocky outcrop in St Catherine’s Bay? Such a topspot would need some form of access, a suitable ascension to the roof that fits the historic battlement but meets modern day needs – and that’s where our spiral stair comes in.

This tower was originally built in 1794 as part of defensive works around the island to deter French invasion, with a specialised masonry gun platform ensuring it stayed in use when other towers became obsolete. However, during the Second World War it was modified by German Occupying Forces who removed the original stair and poured concrete to allow for machine gun mounting – there’s still a swastika inscribed above the steel blast door to this day.

It wasn’t until 2019 that the structure was sympathetically renovated and made into a holiday let, to honour its history and secure its future, with Jersey Heritage overseeing the project. Architects Antony Gibb Ltd designed the sensitive refurb with V&V Stonemasons employed as main contractor. They approached us to help with the conundrum of the stairs.

The accommodation is split over four levels including the ground floor terrace and rooftop space – the Jersey Heritage website description states a ‘very narrow spiral staircase takes you up to a sleeping area…then continues on up…’ which alludes slightly to the difficulties posed by the space available. It’s in such spaces that the compact footprint of a spiral works so well.

The proposed stairwell was of varying width – the first challenge. Was there a way to wiggle a spiral stair up through the space? It was decided the best proposal was to lessen the clear width of the treads, so they were all the same size but the overall stair would be smaller. The clear width of a stair usually has to be of a certain size, depending on how often the stair will be used and by whom, but in this instance Building Control had to agree that this was the safest option to work with the history of the building. The treads were made of steel pans (supporting timber infills) that have front and rear downturn to ensure compliance with the 100mm sphere rule – gaps in stairs have to be small enough to stop people tripping or small people falling through.

The next challenge was fixing the stair in place so it would be strong and stable without infringing on the fabric of the building. As it turned out, it was necessary to lay services right through the centre of the stair foundation, yet another tricky obstacle to overcome, especially as they were having to carve the actual bedrock to make it work. In the end, they were covered with a 170mm deep concrete slab on over the bedrock, to which the central core pole and welded base plate were fixed, with insulation and 70mm of polished concrete making up the finished floor.

The final intricacy was the fixing of the handrail, with the design alternating between wall-hung and fixed atop the balusters – there was a lot of tweaking and back and forth between all involved to make sure the result was just right, with Spiral opting for adjustable fixings to allow for on site anomalies.

The finished stair? A fairly unassuming galvanised steel and timber tread spiral that belies the amount of work that went into it but sits snugly in its space and performing the all-important function of allowing visitors to explore the previously neglected building and reach that wonderful view. 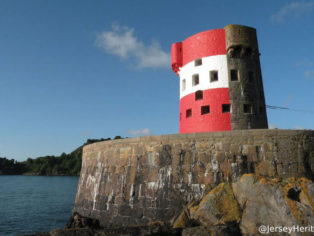