When rail commuters return from their Covid-enforced isolation the redeveloped Glasgow Queen Street station will be there to welcome them – a building whose design is shaped by their movement. Edward Dymock of BDP explains more

Glasgow Queen Street, the third busiest station in Scotland, has been redeveloped to support greener travel and increased footfalls. Its ability to cope with significant increases in passenger numbers will aid the transition from polluting cars to green electric trains. To achieve its increased capacity on a constrained city centre site, the architecture of its new concourse is shaped by the movement of the people that will use it.

A station concourse has two primary, and often contradictory, roles: to allow people to move and also to congregate. To allow efficient movement we created a legible architecture that considers the passengers’ desired routes. Better still, the architecture is shaped to provide reassuring visibility of their destination.

Allowing people to congregate, means not only ensuring the concourse is the right size and shape but also that it considers where people stand, sit and queue so intuitive movement can happen simultaneously.

To understand how best to allow passengers to move around the site efficiently, making the most of the confined footprint, a movement specialist, Movement Strategies, analysed customer use of the old station. Bluetooth surveys and CCTV analysis was used to map passenger movement. This gave the design team insights into the percentages of passenger movements through the west-facing exit (around 70%) relative to the much smaller numbers heading to George Square and the taxi rank to the east.

The survey data was extrapolated to provide the population and peak flows the concourse would have to accommodate in the future. We also had to ensure the concourse could cope with perturbation scenarios – when trains are delayed and concourse populations swell.

Once the layout of the concourse was sufficiently developed, dynamic modelling software was used to prove we met Network Rail’s performance requirements for crowd densities, especially the morning and evening peaks. Each of these times brings challenges: the morning peak puts more pressure on the platforms and gate line and the evening peak puts more pressure on the concourse.

The digital simulations of trains arriving and departing provided the design team with fascinating insights into the changing patterns of concourse use. This allowed us to tweak the design to ensure every part of the new terrazzo floor was contributing to the concourse’s performance.

The new station is not only a welcoming, accessible building, that now caters for increased footfalls but an extrovert place with an enticing civic presence – a building that hopefully will bring a little delight and pride to all who use it.

The Covid-19 pandemic has, I hope, taught us all how fragile our relationship is to this planet and that a collective effort is essential. The station’s dynamic form, shaped by movement, celebrates the passengers’ transport choice and creates an optimistic statement about the future of rail in Scotland. 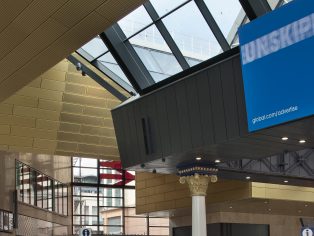