Oak View Group (OVG) has appointed the Royal BAM Group (BAM) as its preferred construction partner, and Populous, a global architecture design firm, to lead the world-class team behind a new 23,500-capacity arena in Manchester. The venue would be the largest arena in the UK, bringing £350 million private direct investment into the city and significant economic benefit.

This follows an announcement last week that OVG – the global sports and entertainment company founded by Tim Leiweke and Irving Azoff in 2015 – had submitted formal plans for the arena to be built in the Eastlands area of Manchester, a city world-famous for its music, entertainment, and sporting heritage.

Known for its people-centred approach, BAM has built stadiums across the world, and has been active in the North West since 1933, having built the City Football Academy, the National Graphene Institute and the Co-Operative Group HQ.

OVG is also pleased to confirm Populous as the principal architect and designer of the new venue – a firm which has helped OVG place inclusivity, safety, and sustainability at the heart of its plans.

The new arena will deliver the best in class artist-fan experience for any arena in Europe, have the flexibility to accommodate multiple event types so Manchester can host a broader range of music, sport and entertainment events, and would be the most sustainable arena in the UK.

Alongside BAM and Populous, BuroHappold, ME Engineers, Vanguardia, Turner & Townsend and Deloitte will make up the project team that will deliver the new arena. Members of the team have unrivalled experience on working on global iconic entertainment and sport destinations and will assist delivery of OVG’s vision of building the best venue in the UK and Europe.

Tim Leiweke, co-founder and Chief Executive of Oak View Group, said:
“I’m thrilled that we have put together a project team of such calibre, and with such strong links to the beating heart of the North West – Manchester.

“While we are living in uncertain times, we know that Manchester and its people are resilient. And we look forward to being intrinsic to the redevelopment of the east of the City, working in close partnership with local people who are the most important part of this project.

“Manchester is a thriving and vibrant city – and along with BAM, Populous, and our other incredible partners, we are excited about a new addition to its entertainment scene in the coming months.”

As well as creating a talented project team to design and build the new arena, OVG would ensure that jobs and employment opportunities at Manchester Living Wage or higher are made available to residents – 3,350 jobs during construction and over 1,000 once opened. 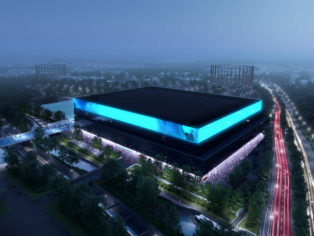