The elite amongst the country’s roofing apprentices are gearing up for the two-day final that will reward the best in each of the two roofing disciplines: pitched and flat roofing. BMI, the UK’s largest manufacturer and supplier of flat and pitch roofing systems, is offering the two awards backed by its market-leading brands. The Redland Apprentice of the Year will recognise the best pitched roofing apprentice, while the most promising flat roof apprentices will compete for the Icopal Apprentice of the Year.

The shortlist was selected from building colleges throughout England and Wales, from Erith to Bolton and from Newcastle to South Devon. And they are not all straight from school, with some seeking a second career like Ceiran Peel-Price, 29, of Irby on the Wirral in Merseyside. His first job after school was in the army but a discharge on medical grounds led him to a second career in roofing. His boss, Les Perry, of Les Roofing Contractors, encouraged him to start an apprenticeship. “He’s a good lad and a quick learner and we thought that the apprentice scheme would encourage him”, says Les.

The winners not only gain a prestigious title – Redland Apprentice of the Year 2018 or Icopal Apprentice of the Year 2018 – but also a £1,000 cash prize for each of them to invest in their future and plus a goody bag of high-quality roofing tools and materials. And these prizes keep giving, as the winners are entitled to support from the two industry brand leaders at the group’s National Training Centre as well as a handsome trophy for the mantelpiece.

The finalists compete over two days at the BMI National Training Centre in Gloucestershire where they will receive professional coaching that examines every facet of running their own roofing business – including business planning, presentation skills, and technical skills. Once they have been through this complete learning experience they are then assessed by a selection of leading figures in the roofing industry will be judging the candidates.

The judges will also participate in ‘knowledge-sharing sessions’ over the course of the two days to answer questions and share the benefits of their experience to this next generation of roofers.

“These awards are part of a wider group strategy to recognise and reward those coming into the industry. We want to raise the appeal of roofing and motivate more youngsters and career-changers to get involved”.

The two-day final will culminate in the Apprentice of the Year Awards Dinner – consisting of the finalists, their tutors and employers, and judges – where the winners of the 2018 competition will be announced. 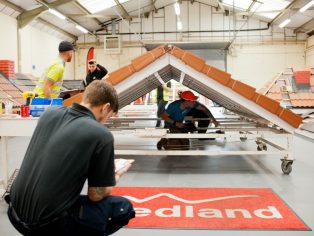