Proposals by FaulknerBrowns for housing scheme to preserve Victorian villa

A planning application has been submitted to Newcastle City Council for a high quality, sustainable, residential development in Gosforth, Newcastle upon Tyne. The proposals have been designed by FaulknerBrowns Architects on behalf of Union Property Development Ltd and will reinvigorate and preserve Ashfield Towers, one of the area’s magnificent 19th century Victorian villas.

From its original function as a private residence, Ashfield Towers later served as a workplace and most recently a school building for Westfield School for Girls. Union Property acquired the 1.4 acre site in 2018, enabling the school to consolidate its estate onto a single site and the villa to be returned to its intended use.

The design team carefully considered the site’s location within the Gosforth Conservation Area during the development of the design proposals. Liaising closely with the local planning authority, conservation, landscape and urban design officers, they ensured that the proposed use and scale of the development remained in keeping with the surrounding architectural and landscape assets of the conservation area.

The villa has been faithfully restored and remodelled to reinstate its Victorian character, stripping away later internal and external additions to reveal a form originally intended in its former residential use.

Taking their proportions from the villa, the new building elements complement the existing structure with a contemporary form that references their Victorian neighbour, whilst allowing it to retain its prominence on the site.

The materials have been carefully chosen to suitably contrast and compliment the villa and its coach house. The mix of the existing honed and chiselled stone is contrasted with new pre-cast concrete elements and hand-moulded bricks. All the new elements are connected through a pre-cast stone stringcourse, that acts like a ribbon, wrapping in and around to connect back to the existing stone wall to the north. To compliment and contrast the tone and hue of the yellow sandstone of the existing built elements, a light blush/peach toned brick and pre-cast stone has been selected, a colour palette cognisant of the surroundings conservation area.

The proposals for the external landscaping reinstate the original character of the villa’s grounds, removing the large tarmacked areas—later added to provide car parking for the building’s use as an office and then school building—and replacing with complementary hard and soft landscaping, transforming and enhancing the appearance of both the site and the villa, within the conservation area. A soft landscape threshold with mature trees has been enhanced, optimising views towards the villa from the approach road.

The retention and enhancement of the ornamental garden to the south of the site creates a social, communal garden for the residents.

Jane Redmond, Associate at FaulknerBrowns, said: “Ashfield Towers has given us a fantastic opportunity to revive a beautiful piece of Gosforth’s heritage, returning the site to its original, residential use. The rich context of the conservation area continues through to the proposed shared gardens while the new architectural elements are inspired by the language of their Victorian neighbour, but with a restrained form and simple material palette that brings forward a varied mix of elegant new homes.” 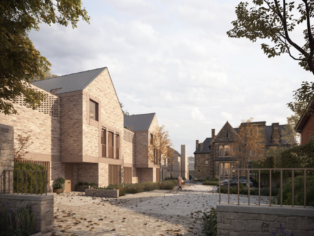