Peter Kelsey, the man who founded and led Designer Contracts to become the UK’s largest flooring contractor, has been honoured with an Outstanding Achievement in the Flooring Industry award.

Announced at the Contract Flooring Journal’s 2021 awards ceremony, held at Coombe Abbey in Warwickshire on 3rd September, Peter was described as a “giant of the UK flooring industry”.

An audience of top industry executives heard that Peter had “ensured his company has survived the pandemic and thrived as well. He supports charities and he supports his own employees with mental health programmes during and after the pandemic. He is, everyone would recognise, a very decent man.”

After first starting the business from his garage at home, Designer Contracts became an independent company 17 years ago and now employs more than 350 staff across 15 regions with an annual turnover in excess of £40m.

Peter himself has some 45 years’ experience in the floorcoverings industry. The early part of his career was in multiple furnishing retailing, from store management to marketing director.  In 1992 he started a contracts division for an international retail group.  In 2004 the retail group went into administration and Peter bought the flooring division which had built into a £10m business. Designer Contracts has since quadrupled in size.

As well as flooring, the company provides curtains and blinds, furniture and lighting, and operates a showhome interior design services division. It works with all the UK’s key new homes developers as well as supplying the social housing and care home sectors, educational establishments and public sector buildings.

A personal commitment to sustainability has seen the company named ‘Take Back Partner of the Year’ four times in the Carpet Recycling UK (CRUK) annual awards. And Peter’s many charitable contributions – particularly to Ashgate Hospice in Chesterfield and the national children’s help line, ChildLine – have cemented his reputation as a philanthropic entrepreneur.

“The award came as a total surprise – it was a secret that I simply wasn’t in on when I was asked by colleagues to attend the event! I’m incredibly proud of what the company has achieved but without the fantastic team that is Designer Contracts, we wouldn’t be where we are today – it really has been down to the hard work and dedication of a lot of people over many years.” 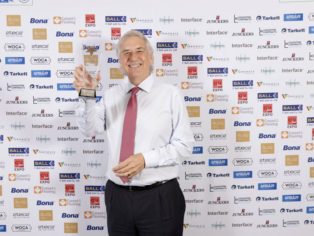