Biophilic design has become firmly entrenched in the modern office psyche in recent years as the office evolves and we take on a more people-focused approach to its design. Cyril Parsons of Office Principles, considers the various means in which the workplace can deliver when it comes to bringing the outside in

The term ‘biophilia’ was initially coined by psychologist Eric Fromm in 1964 and is a reference to the human need and desire to connect to nature. In the commercial world, biophilic design is rooted in the consideration of the office as a community.

As a style of design, it is fast gaining traction, with architects and designers starting to view it as an integral part of any commercial and public building blueprint and many of us consistently turning to biophilic references and styles in order to create the most desirable working environments for our clients.

Professor of social ecology and one of the pioneering theorists on the impact of biophilic design, Stephen Kellert identified biophilia, in a paper he co-wrote with Elizabeth Calabrese on ‘The Practice of Biophilic Design’, as “the inherent human inclination to affiliate with nature that even in the modern world continues to be critical to people’s physical and mental health and wellbeing.”

For those of us involved in office design, at any level, the shared intention is to create workspaces that will bring workers in to the office and help them to engage with each other and their surrounds, supporting social integration and communal wellbeing. Biophilic design is now recognised as playing a key role in helping to realise that intent.

Supporting the development of community and neighbourhoods

The act of creating a community in the office is to create a sense of belonging; of being part of something; working together and in support of each other; wanting to be a part of the whole. Biophilic design provides the canvas for this community, offsetting the rigorous digital working practice that we are surrounded by and enhancing our feelings of connectivity.

There’s a growing movement towards the creation of neighbourhoods in our offices. The very idea of the neighbourhood conjures up a friendly, warm and inclusive approach. In the outer world, our neighbourhoods are broken up by parks and our streets are lined with trees. The concept of neighbourhood in the office environment is to ape this exterior physical prototype, introducing greenery and foliage that will emulate the natural world in its complexity and integration.
We can mark out neighbourhoods and distinguish spaces using living walls, planters and water features instead of floor coverings and panelled dividers. This immediately allows for a more natural flow and encourages free movement.

There are different manifestations of biophilic design that can then be used in those spaces from the physical (natural light, plants and living things) to the representative (pictures of nature, shells, sand etc.). We can also choose to use natural and organic materials and fabrics, along with reclaimed wood, stone and bricks.

The urban environment separates us from the natural world and positions a lot of us in an office for eight hours a day. BRE states that 60 per cent of office staff don’t have enough access to sunlight so the first step for architects and designers, when approaching the planning stage, is to assess the natural light and focus on ways to maximise it.

Concentrating on natural light is also likely to help with any biophilic elements that are worked into the design, as well as automatically improving end-user wellbeing.

Next step is to recreate as much of the outdoors inside as possible given that all greenery and vegetation provide us with wellbeing and health benefits, including improved mental health and longer life expectancy. There’s also evidence that the presence of plants can act to combat potentially dangerous ingredients in a commercial environment.

Business publisher, Raconteur, in an article outlining the benefits of biophilic design, references research carried out by Norway’s Agricultural University in Oslo, which indicates that plants remove harmful organic compounds, such as formaldehyde and benzene, that are found in the paint, carpets and furniture in the majority of commercial buildings.

Placing nature in the mix

Not all employers have the resources to ape the style of Amazon and add glass-domed greenhouses to their company headquarters. Living walls, plants and flowers are the top favourite choices for those who haven’t an abundance of space or budget to play with and are certainly worth considering in any plans.

On the lowest rung, when space and budgets are really tight, clients can simply supply an assortment of plants, making sure that the bounty is as plentiful as possible. Employers can also include workers by asking them to select and bring in their own desk plants. If staff take responsibility for certain areas –owning the plants and elected spaces – this is more likely to prove to be a workable concept.

For those who have greater ambition (and budgets to match !), there are a whole host of big corporates, who have had the funds to pay for grand designs, to use as inspiration. From CSG International and Adobe in Bangalore to Apple in California and Amazon in Seattle, there are no limits to what sensory celebrations are out there to feast on and admire.

Ultimately, there is potential for all office environments, regardless of size of floor space or funds, to embrace biophilia. Introducing living elements is an opportunity to breathe life into the environment, putting us at one with nature – and with each other.

It is also likely to further fuel the collaborative, people-driven approach to which both clients and end-users aspire and so it makes sense to include nature and natural elements in the design to some degree. 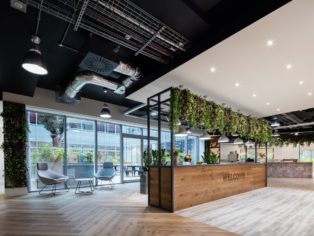 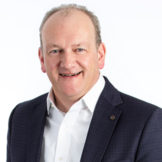