Mapei products have been specified for a structural repair project at the University of Essex in Colchester. The Reinforced Concrete framed podium that provides a link between the university buildings and a roof to the service roads at lower ground was partially demolished, with the remnants of the podium being reused with a new building structure.

In a structural survey commissioned by the University, and undertaken by engineers Mason Navarro Pledge (MNP), it was concluded that the second beam required strengthening to support loads that would be applied in a permanent state due to the heavy use of the link bridge. The beam showed signs of significant corrosion at the support of the existing footbridge, and the columns had areas with steel corrosion and delamination of concrete due to low concrete cover.

Cemplas Waterproofing and Concrete Repairs Ltd completed the works to a very tight schedule thanks to the Fast Track nature of the materials used on site; during the project, a total of three Mapei systems were used for concrete repairs, structural strengthening and protection.

The concrete was found to be badly deteriorated in certain areas of the beam, and the columns had areas where the concrete had spalled due to corrosion of the reinforcement steel caused by low concrete cover. Mapei recommended removing the deteriorated concrete and then cleaning the steel prior to the application of Mapefer 1K, a one-component corrosion-inhibiting protective mortar for the reinforcing steel. The beam was then repaired with Mapemortar HB R3, a high build thixotropic mortar which can be applied on vertical and overhead situations without formwork to a depth of up to 70mm per layer. The columns were repaired with the structural rapid-setting, thixotropic fibre-reinforced mortar Planitop Smooth & Repair R4 which can be applied between 3mm and 40mm in depth.

After repairing the beam, it was prepared by rounding the corners. An even coat of Mapewrap Primer 1 was applied to the concrete surface, and while still fresh, Mapewrap 31 – the two-component, medium viscosity epoxy resin was applied. Mapewrap C UNI-AX HM 600, a high-strength, unidirectional carbon fibre fabric with high modulus of elasticity, was laid into the Mapewrap 31, which impregnated and bonded the fabric. Alternate layers of Mapewrap 31 and Mapewrap C UNI-AX HM 600 were applied until the correct build up was achieved to meet the Strengthening design. Once the final layer of Mapewrap 31 was applied, Quartz sand was broadcasted in to the wet resin to provide a key for the protective covering system to be applied on top.

Mapelastic Guard, a protective two-component, flexible cementitious mortar was applied to provide an effective protection for a 50-year design life. It was the ideal choice for the engineer as it protects the concrete against the penetration of aggressive atmospheric agents that can lead to corrosion, and protects the concrete in areas of low cover as a 2mm coating of Mapelastic Guard corresponds to 30mm concrete cover. In addition, it helps to protect the Mapewrap C UNI-AX HM 600, and because of its light grey colour gives a uniformed concrete appearance, blending the repair into the building. 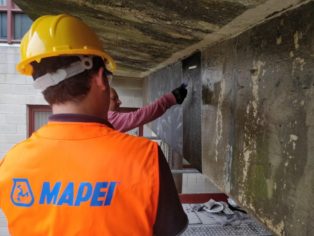 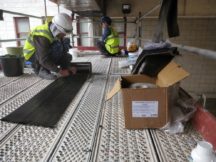