Here’s one they made earlier

When you think of the terms ‘flatpack’ and ‘prefab’, you might picture a certain Swedish furniture store, and probably recall stressful afternoons spent sifting through a box looking for component parts. You may not imagine that these terms can be applied to houses, and you may be under the impression that if you do buy a ‘flatpack home,’ you’ll be required to completely assemble it yourself. Put down your hammer, because you’ll be pleased to know that self-assembly it isn’t.

These homes are made using prefabricated parts, so, technically, we’re talking about flatpack homes here. However, a home partially assembled in a factory then finished onsite can also be referred to as a prefab home, so the two terms are largely interchangeable. The phrase ‘kit home’ can also be used to describe the same thing. All these terms mean is that some proportion of the building work on the house has been done offsite in a factory.

The offsite nature of flatpack home construction means that only certain types of building systems can be used, ones which lend themselves to some degree of prefabrication. Where a masonry home needs to literally be built brick by brick onsite, much of the assembly of a timber-frame or SIPs home is done offsite. This isn’t to say that your entire house will be delivered on the back of a lorry, just that parts of it – the timber frame or SIPs (structural insulated panels) which make up the walls, for example – will already be complete when they arrive.

It’s easy to understand why lots of people assume you have to build a flatpack home all by yourself; after all, you would if you bought a flatpack table. But as houses are a lot more complicated and require a lot more expertise, you can let the experts do it. The term ‘self-build’ is actually rather misleading here; while it’s true that some self-builders do carry out all the assembly work onsite themselves, they make up a very tiny percentage of the market. The majority might decide to self manage their project, or try their hand at a bit of tiling, or even take a completely hands-off approach and appoint a project manager. All of these people would still qualify as ‘self- builders,’ because being a self-builder isn’t about how hands-on or hands-off you are; it just means you commission a house that is not built by a developer.

Some people might be turned off by the idea of a flatpack home because of the myth that you’d be buying something ‘off the shelf’ which isn’t personalised for you. A flatpack home might be ‘off the shelf’ to an extent, but the vast majority of companies who provide such homes offer their customers a substantial amount of customisation. In fact, buying a ready-made kit home from a catalogue of pre-set floorplans and house designs is the exception rather than the rule.

With the huge increase in self-building, it’s becoming easier to design a home that’s right for you. Most people only embark upon a self-build project once, so you want to make sure you do it right, and get a home that fits around you, not the other way around. To this end, many kit home suppliers nowadays offer fully customisable design plans for you to work from. Or, if you know exactly what you want, a lot of suppliers even offer a fully bespoke design service. So, if you wanted to, you could design a home completely from scratch and still get all the benefits of a prefabricated house. The rapid speed of build is the number one reason self-builders opt for a flatpack home design. As you can probably imagine, the difference in the build times between building a house brick by brick and slotting together pre-assembled wall panels is quite significant. The full superstructure of a timber-frame or SIPs house can be assembled in around two to three weeks. There are also less potential delays when you opt for a ‘dry’ construction method like timber, compared to a ‘wet’ one like masonry. Weather plays no part in the speed of a timber-frame or SIPs build; construction can continue even through a downpour.

When you opt for a prefabricated design, you’ll dramatically slash your project costs because much less time will need to be spent onsite, meaning lower labour costs and fewer site deliveries. This is less impactful environmentally and to your future neighbours too. As the panels are made and partly assembled in a quality-controlled factory, your risk factor will be much lower because there is much less that can go wrong than if the entire superstructure was built in situ.

It will also mean one company is responsible for all the build elements, rather than you having to rely on lots of different trades to arrive on time and in the right order. This makes flatpack homes a great option for anyone wanting to project manage their self-build project themselves, or just for people who want to remove as much stress as possible from the entire process. 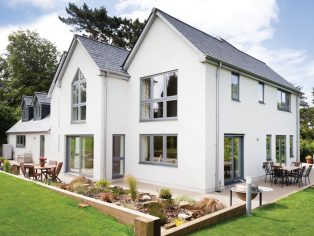 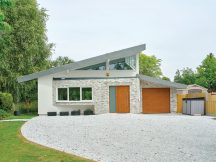 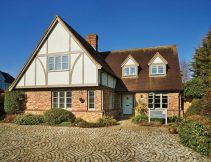