Henley Investments has submitted an application for the first phase of the mixed-use district centre at Ebbsfleet Garden City. The proposals include 81 affordable homes, a nursery, gym, extensive public realm and a new 30,000 ft² Morrisons. This first phase will have a GDV of £32m, while the whole district centre will realise £150m.

As part of the plans, national supermarket Morrisons, has entered into an agreement that will see it occupy the site on a 20-year lease as anchor to the district centre.

“This is a fantastic achievement by the team, to unlock the complex District Centre and to secure Morrisons at Ebbsfleet will be a major boost to the area. This element of the Masterplan will provide the social heart to the place. Henley is now bringing forward a state-of-the-art community hub building, a new high street and over 500 residential dwellings as part of the district centre.”

“Morrisons is delighted to be anchoring the district centre and be an integral part of the local community at Ebbsfleet. Morrisons will be creating over a hundred local jobs and is excited to offer their award-winning produce to local residents. Morrisons has entered an agreement with Henley and look forward to the construction works starting shortly.”

“We are delighted that our sister company is pressing forward with this high-quality scheme.  With the combined offer of a Morrisons Store, café and its adjoining neighbourhood green, we see this as being the catalyst for subsequent delivery of the High St and wider Market Centre in Alkerden village.  This will underpin the heart of the Whitecliffe Development, which will further enhance the amenities already available for existing and future residents.”

As master developer of the entire quarry site, Henley Camland is enabling the development of over 6,000 homes and a 1,200 pupil education campus.

The latest news follows on from the announcement last year of the series of deals at Whitecliffe, Ebbsfleet Garden City, including 1,000 housing plots to three national housing developers. 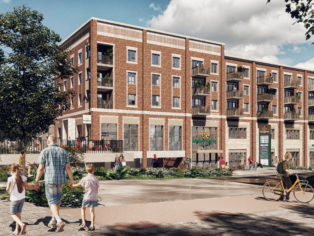