In Wycombe, proposals from the district council are heavily focused on retail and the authority is hoping that by taking control itself of the flagship £150 million Handy Cross development, that this will change perceptions of the Buckinghamshire town. By Steve Menary

The notion of building a new gateway to a town to change the perceptions of visitors is not new. The Thames Gateway is a major urban regeneration initiative that is transforming a swathe of land in East London and Kent, while the Mersey gateway is a new bridge across the Mersey between Runcorn and Widnes that is one of the UK’s biggest engineering projects.

The £150 million Handy Cross development is situated on land adjacent the junction of the M40 and A404 roads that lead visitors into the town.

The project is being developed in four key stages. Phases one and two comprise the development of a supermarket, which will be run by Waitrose, and a leisure centre to replace an existing centre that borders the site and will be ultimately demolished to make way for part of the final two phases.

Unlike most major commercial developments, the council has taken control of developing the scheme and will retain control of the site with the buildings leased out over 25 years. To help, the council turned to experienced developer Charles Brocklehurst, who was recruited as the client’s major projects executive and wants to create a “new, vibrant destination in High Wycombe”. That ideal is evident throughout the design for the entire project as Richard Wheeler, the operations manager at Willmott Dixon, the contractor appointed by the council to build out the first two phases, can attest.

Wheeler says: “The council is keen to raise the profile of Wycombe. There has been a town centre redevelopment in recent years and this is a continuation. Charles has a vision for the Gateway to Wycombe. He wants to improve the entry to Wycombe.”

Before Willmott Dixon were brought on board, the council recruited Mace as development manager to help bring the proposals through the planning system. Mace is also providing a number of other services on the scheme including project management, cost management, design services and CDM co-ordinator but Richard Markland Architects was used to draw up the master plan. From the outset, the intention was to use the external design to make the site visible from the roads bringing visitors to the town.

“It’s quite a compact and ambitious scheme for the area and an interesting range of uses for an edge of town scheme,” says Richard Markland.

“With the master plan, we needed to essentially have two leisure centres in operation so that we could close on and keep the other open and have a smooth transition. The client also wanted a flexible master plan so that we could put the headquarters where the hotel is. Within that, there is a spine road through the centre which is fixed.”

With 250 houses near the development and an area of outstanding natural beauty on the opposite side of the A404, the design has had to ensure that sightlines are not damaged.

Tree planting will play a major part. Around 116 trees were removed and more than that number will be planted at the site as a shield from both the nearby existing housing and also the motorway. However, that will only be a shield for visitors already inside Handy Cross Hub.

What the design aimed to achieve was to create an inward-facing scheme for the visitors, who would interact instead of just turning up and then leaving.

Markland adds: “We didn’t want hermetic boxes that you can park in front of. Because it’s a car-serviced facility, we wanted to foster a sense of space so we have a positive public realm and the various parts of the scheme looking out onto that. With Waitrose, there was a discussion about where the café would be and we wanted it behind a glazed facade and facing out the spine road.”

The aim of the overriding design in the scheme’s master plan has also been to create a development that attracts attention and can be a striking new gateway to High Wycombe.

Richard Markland Architects came up with a master plan and Curtins is working as consulting civil engineer for the whole site. Gillespies has been retained by the council as landscape architect, but the architectural commissions for the individual buildings have been parcelled out as separate packages to different architects. Corstorphine & Wright are designing the supermarket for Waitrose and AFLS+P have the commission for the leisure centre element.

“Projects with swimming pools tend to be very specialist and Waitrose have their own stable of architects that they are happy working with,” says Markland, whose practice has retained the design role for the infrastructure.

For Waitrose, the store at the Handy Cross Hub will provide an entry into the town. The other major grocery chains have stores in Wycombe. Waitrose’s parent company the John Lewis group does have a non-food store in Wycombe, the nearest Waitrose store is in Marlow.

The designers on the Handy Hub store, Corstorphine & Wright, have designed other Waitrose projects before, including a £20 million store at Stratford-upon-Avon. Willmott Dixon has also worked recently for Waitrose in Aylesbury.

The Waitrose store at Handy Cross Hub will comprise 2,300 sq m of trading space and internally, the scheme differs little from the standard store scheme as Richard Wheeler can confirm, but externally the project has, like the rest of the scheme, been designed to make a statement to visitors to Wycombe.

“The council did a lot of consultation and this was the design that came out of that,” says Wheeler. “It’s a larger model Waitrose but what makes it different to the norm is the externals.

“It’s completely different to the standard Waitrose and that’s to fit in with the whole ethos of the site with feature cladding and to be a striking landmark building.” The design specification includes rain screen cladding and anodised Eyetech aluminium mesh, which have both been supplied by James & Taylor. Wheeler adds: “The cladding behind has weather tightness and the mesh in front is purely aesthetic.”

The other element of the Handy Cross scheme that is on site is the leisure centre, The old leisure centre will ultimately be demolished to make way for the new centre, which will be operated by PFP.

The leisure centre will feature a 50 m, eight lane swimming pool with a moveable floor that means scuba divers can train there. The centre will also include a climbing wall, a 20m by 8m training pool, a 12-court sports hall, two squash courts, a four-lane bowls rink and a 150-station gym.

Again, the idea of a design that can be seen from afar plays a part in the proposal drawn up by AFLS+P. The centre includes a giant media screen that was initially going to be part of the external elevation. The screen has since been moved inside, but can be seen from outside due to the large amount of glazing.

James & Taylor rain screen cladding has also been specified for the externals, along with pre-patinated aluminium cladding supplied by KME.

“Charles saw that at Beaconsfield Services and wanted to include it,” says Wheeler.

Construction on the Waitrose store will reach a peak in March and April 2015, when up to 250 people will be working on the scheme. Practical completion must be achieved by 16 November 2015.

“Waitrose will open that day,” says Wheeler. “They had requested that we hand over early but there are planning conditions that the leisure centre has to be operable and we are 100 per cent complete on-site services.”

The council is aiming for a BREEAM rating of very good on both the Waitrose store and the leisure centre. Two more phases will then follow and on completion, the overall scheme will ultimately provide 33,000 sq mof buildings across the 17 acre site.

The remaining elements remain to be confirmed, but retail will again feature. One phase will comprise four commercial buildings, which will be a mix of B1 retail usage and offices, while the final phase will feature a flagship headquarters building and, depending on ongoing negotiations, a 150-bed hotel or a building that will become part of the headquarters development. For all these elements of the Handy Cross Hub, the same aesthetic will be applied to the design of making visitors notice. 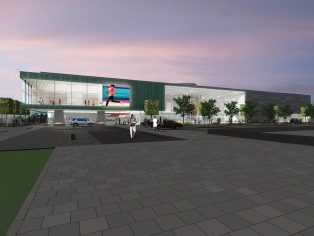 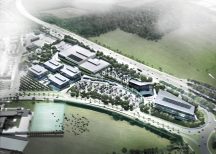 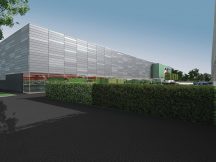 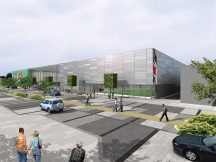 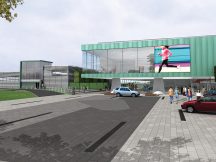