Get smart, get control

The industry is now well versed in the benefits of LED technology and the energy savings it can generate.
For example, lighting accounts for 20 per cent of the energy used by a typical commercial building; upgrading from traditional technologies to LED however could result in savings of up to 50 per cent. In addition, installing a lighting control system could further minimise the
energy consumption.

While all this is great news for building owners and occupants, designing-in these lighting controls can often be a headache for architects, as the devices may be difficult to conceal effectively. So how
can architects strike a balance between providing a cost-cutting lighting control technology for their clients while remaining true to the intended design?

One solution is to specify an intelligent, de-centralised lighting control with wirelessly-operated lighting controls placed within each luminaire. In addition, luminaires with embedded sensors can auto-commission themselves to provide lighting only when required, for example if someone walks into a space. With sensors and controls integrated into each luminaire, a fine grain of control can be achieved, while all luminaires can also work together through ‘hive intelligence’.

Designing a scheme to comply with Building Regulations is a basic necessity; however, achieving a BREEAM certification or meeting the recommendations of the British Council of Offices (BCO) can further boost the sustainability credentials of a building.

Employing an intelligent de-centralised lighting control solution that embeds presence and daylight sensors in each fixture enables a system to automatically work to suit the occupants and deliver the needed controls where required.

This type of system also provides significant on-site savings as well as a smoother specification, design and installation. It is enough to select a luminaire and connect the system to power – it will then set itself up with no programming required. Such systems also have the capability to adjust to changes in the layout, such as after an office reconfiguration, without any further re-programming.

However, meeting certain legislation and guidelines comes first, and below are some of the main considerations.

To ensure maximum credit under BREEAM Hea 01 (“visual comfort”), internal lighting in commercial offices has to be zoned to allow for occupant control, and zones cannot be more than four work stations. This could be difficult to account for in the design if there’s no clarity over the precise locations of each workstation prior to the building’s completion; however, architects can mitigate this issue by specifying a luminaire with an in-built sensor.

The BCO recommendations can also prove tricky. For example, the recommendation calls for a combined motion, photocell and IR receiver devices to be installed in the ceiling on a grid no larger than six by six metres. Without being able to determine where the workstations would be placed, this can be problematic.

Again, an intelligent decentralised light- ing control system can easily handle this as in fact each grid is subdivided by having a sensor in each luminaire, and therefore can ensure an architect can meet these recommendations no matter where the desks are positioned.

A decentralised lighting control system can offer much more than just lighting control and energy efficiencies. With sensors built into every luminaire, facility managers can extract data from each sensor in order to gain insights into the energy consumption of the building and its occupants’ patterns of movements.

This data analysis can empower users to make further cost efficiencies on lighting consumption by ‘tuning’ light levels to daily patterns of use. This information can be used to minimise energy consumption or expenditure for cleaning and security, by not cleaning unoccupied areas or by suspending patrolling in certain parts of a building.

With access to real-time data on the occupancy of the office, building owners and energy managers can utilise every square metre of space while also being able to open and close larger floor areas as and when necessary. According to AWA Research, such measures would result in reduced floor space, thus leading to minimised energy consumption from lighting or other services, and a total energy saving of up to 40 per cent. In comparison, a saving of only 10 per cent is achieved by switching from traditional lighting to LED.

This is why by specifying a smart lighting system, architects could offer their clients not just lighting control, but also in-depth knowledge about the building, how it operates and its occupant movement patterns, making their scheme truly ‘smart’. 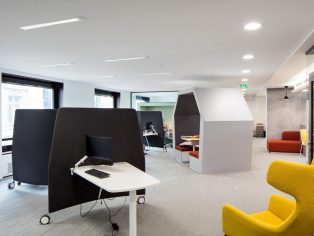 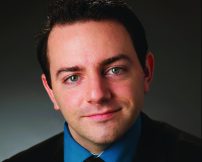