Get on top of the issue

Despite British Standards regarding slating and tiling being updated, sadly practice is still lagging behind, resulting in voided warranties and significant roof failures. Dr Kevin Ley of Redland explains.

The first iteration of BS 5534, the ‘Code of Practice for Slating and Tiling in the UK’ was CP 142, published in September 1942. It set the standards for recommended best practice for slating and tiling, covering all aspects of pitched roofing above the rafters. It was first codified as a British Standard in 1978 and variously updated since.

Most recently revised in August 2014, changes included the introduction of mechanical fixing of all hips and ridge tiles, new wind uplift resistance requirements for underlays, and a considerable increase in the tile fixings particularly for interlocking tiles which are the most widely used. This increase has been brought about by a simultaneous increase in the minimum tile fixings required for tile security and safety along with increased design wind loads, by up to 100 per cent in some cases. Consequently, all single lapped, interlocking tiles on a roof now need to be nailed, clipped or both depending on exposure.

BS 5534:2014 applies to all pitched roofing, whether new build, re-roofing or repair work, and came into full force in March 2015. Although not legally mandatory, compliance with BS 5534:2014 is considered not only best practice, but also provides the best defence in the event of failures or disputes. In the self- and new build sector, the NHBC is especially vigilant in respect of the standard and, since July 2015, all new projects, regardless of size or phase; must comply with BS 5534:2014 to qualify for its 10-year Buildmark Warranty.

Despite the new code of practice being three years old, many new roofs are being installed that do not conform to the standard. For those designing, commissioning or installing pitched roofs, there is a need to be aware of the main provisions to ensure specifications are being met.

The revised code of practice states that the use of mortar alone can no longer be relied on as a method of fixing as it has been deemed to provide no reliable adhesion. Mortar can still be used but only if accompanied by mechanical fixings. This means if mortar is used then additional materials are needed including a ridge/hip batten with fixings to rafters, and mechanical fixings for securing the ridge/hip tiles to the ridge/hip batten.

While the above measure secures the ridge/hip tiles it does not eliminate the risk of mortar failure, resulting in roof leakage and subsequent repair work as the mortar can still crack and drop out of the mortar bed. A simple way of avoiding all the hassle associated with mortar is to use the alternative of modern dry-fix ridge/hip solutions instead.

When the wind blows over a roof, uplift forces act on both the underlay and the tiles. The revised code of practice introduces new design wind load calculations based upon Eurocodes, resulting in greatly increased design wind loads – up to 100 per cent in some cases – which means a greater requirement for tile clips in manufacturers’ fixing specifications. Since fixing specifications – the location, number and type of nails and clips required – vary so greatly and are based on many factors, including geographical location and type of building, it is even more important that every roof is fixed in accordance with manufacturers’ recommendations, ideally with a site-specific fixing specification. Historic experience should not be relied upon!

The issue of wind uplift resistance of roofing underlays, or resistance to ‘ballooning’ as it is sometimes called, and its consequences for underlays is addressed in the new standard. The primary purpose of a roofing underlay is to reduce the wind load acting on the roof tiles by taking a significant proportion of the wind load itself. To do this successfully, it must not stretch to the point where it can touch the underside of the roof tiles when subjected to wind pressure.

If a roofing underlay does stretch, or ‘balloon’, so that it touches the back of the roof tiles, then it ceases to perform this primary function, as the wind load taken by the underlay is transferred onto the roof tiles. The tile manufacturers’ fixing specifications do not allow for this additional load and roof tiles can subsequently be blown off the roof during a storm even if they are fixed in accordance with the tile manufacturer’s fixing specification.

A related problem concerns the bursting open of unsealed underlay laps when subjected to wind pressure which can also cause the removal of roof tiles. Both the old and new code of practice recommend that a timber batten be installed over the horizontal lap between courses of underlay to prevent the risk of this happening. In practice this can be achieved either by increasing the horizontal lap of the underlay to coincide with an existing tiling batten, or installing an additional batten also known as a “fly” batten over the horizontal lap.

Many roofing contractors do not like installing these additional battens as they can cause a trip hazard when working on the roof. The preferred alternative is to increase the underlay lap which has the disadvantage of increasing the amount of underlay required as well as requiring more care during setting out of the roof.

The 2014 version of BS 5534 introduced a new single test that measures the ability of an underlay to resist stretching when exposed to wind pressure. These test results are then used to establish which types of underlay are suitable for the various regions around the UK.

Before commissioning or undertaking any work, it would be prudent to ensure that any preferred underlay has the necessary checks and testing in place to ensure it is fit for use for the project in question. These changes are a significant step forward from what has been the baseline standard for roofing practice in the UK. 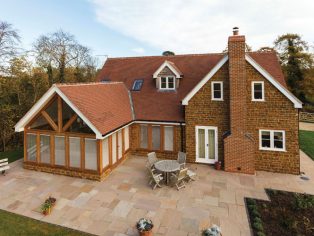