The first phase of a new village for Ebbsfleet Garden City has been approved by planners.

Ebbsfleet Development Corporation approved plans for 281 homes in Ashmere, which will be the second village to be developed in Whitecliffe, formerly known as Eastern Quarry.

The homes in this first phase will comprise 175 one- and two-bedroom apartments, and 106 houses and 25% will be ‘affordable’ with a mixture of shared ownership and social rent.

The first village created in Whitecliffe was the now well-established Castle Hill.

When complete, the village of Ashmere will have around 3000 homes, a new primary school and village centre.

Mark Pullin, Chief Planning Officer at Ebbsfleet Development Corporation, said: “Whilst these are challenging times for us all and working practices have changed in recent weeks, we have been able to approve these plans under powers already delegated to officers.

“This first phase of development at Ashmere marks a significant step forward in terms of design quality within Ebbsfleet, creating eye-catching new homes that have been inspired by Ebbsfleet’s past. The oast houses and maltings of Kent’s villages have been fused with the handsome Georgian streets of Gravesend’s town centre, to inspire a rich mix of distinctive new homes, set within streets full of trees and planting as expected of a Garden City.

“Once Whitecliffe is complete there will be 6,250 homes across three villages, each with their own centre, giving them a distinctive feel.”

Ashmere is one of the first schemes in Ebbsfleet to adopt Ebbsfleet Development Corporation’s ‘Design for Ebbsfleet’ design guidance ( www.designforebbsfleet.org ). The guidance sets out four design characters for new neighbourhoods that have been derived from Ebbsfleet’s landscape and cultural heritage. The masterplan for Ashmere references all four languages to create neighbourhoods brimming with character that are distinctive to Ebbsfleet.

The landscape design also pushes new boundaries within Ebbsfleet and has been developed to take account of Ebbsfleet’s Public Realm Strategy which was published in 2019.  The Public Realm strategy was also developed by corporation, to put the ‘garden’ into the Garden City, creating green, healthy and sustainable tree lined streets across the city.  This has led to 40% more street trees, and considerably more street planting, when compared with typical new housing developments in the local area.

The design of the streets and parks within the village take inspiration from the landscapes founds across Kent’s North Downs, and the history of quarrying within the Whitecliffe area.

The plans were submitted by a joint venture between Countryside Properties and Clarion Housing Group. 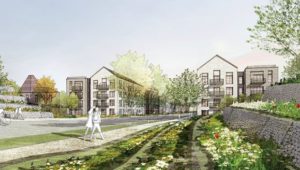 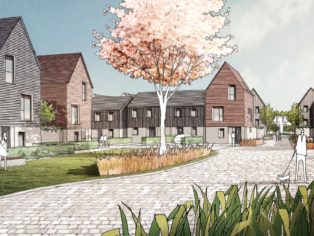