Garden designer Elaine James and her antique dealer husband Ian used their combined skills to design a tranquil home around the ever-changing view of the north Yorkshire countryside.

It can be blowing a gale across the field at the back and the traffic can be thundering along the road at the front, but Elaine and Ian James’s house near Harrogate is a haven of peace and tranquility.

Between them they have designed a home which is virtually noise-proof, a property which embraces its peaceful rural outlook while all but eliminating the daily hum of traffic passing their door.

Ian’s vision for the house was intuitive. He wanted to build a U-shaped house that focused outwards on the open fields that stretch as far as the eye can see.

“The house is north facing, which has many advantages,” says Ian. “We get the best sunset views and lots of natural light without excessive heat in summer. For this reason we decided to have all the main living rooms on this side of the house, with lots of glass so that the views became an integral part of our day-to-day lives.”

Ian was also keen to create extended sight-lines through all aspects of the property. This means that anyone stepping into the hallway can see straight through the building to the garden and countryside beyond, while anyone standing in the kitchen has an uninterrupted view through the conservatory into the sitting room at the far end of the house.

“This automatically makes the place seem light, large and spacious,” he says.

This design ethos is echoed in Elaine’s symmetrical garden, which links the house to its rural views through a series of mini-gardens, carefully structured paths, colourful borders and unobscured vistas.

“By developing the house and garden together we’ve been able to seamlessly link the two, rather than the garden being something of an after-thought,” says Elaine.

In fact, long before they started the build, the couple had a very clear idea of what they wanted from their new house and how to make the most of the plot. They had lived in the house next door for many years and its large garden had included a commercial showroom-style building, built in the eighties.

The road to planning

There was no planning consent to convert it from a commercial to a private property, as the plot sits in an area of scattered rural development and the council was resistant to infill buildings.

The previous owner had applied for planning permission but was turned down on a technicality. Ian, however, wasn’t deterred. When he and Elaine decided to self-build they realised they had the perfect plot in their own garden. With the help of an architect, they reapplied and in 2008 were finally granted permission to convert the showroom into a domestic dwelling. The next step was to submit the design for their dream home, for which planning permission was granted in 2011.

“It took around 10 years for permission to be granted, but it was worth persevering,” says Ian, who describes the house as a glorified three bedroom ‘dorma bungalow’ with open plan living spaces on the ground floor and dorma-style bedrooms and family bathroom upstairs.

But before they could put the plans into action, they had to sell the house they were living in to release funds for the build. To make sure they didn’t allow the planning permission to lapse, however, Ian and Elaine employed a company to lay the foundations.

“As long as you can demonstrate to the building inspector that the building work has begun you don’t have to reapply for planning permission,” says Ian. “We left it until the very last minute – September 2013 – with just a couple of weeks to go before the permission ran out – but it was worth doing. It gave us the necessary breathing space until our house was sold.”

While they waited to sell, the couple fine-tuned the design and put the build out to tender.

“We already knew, from living next door, the kind of things that worked well and what didn’t work,” says Ian. “I had renovated the old house and had a very clear idea in my head of how the new house would look, with functional utility areas to the front of the property, which is noisier, and living rooms to the back where it is much quieter. By building a U-shaped house, with a conservatory in the centre, we would have the best of both worlds.”

The conservatory opens directly onto the garden but it is sheltered on three sides by the main house. Glass windows on those three sides means that light pours right through the property from all angles.

Ian and Elaine wanted their new home to be a mix of old and new both inside and out, with traditional style Desimple Wienerberger Hathaway Brindle bricks to complement their old home, Imerys Beauvoise roof tiles and contemporary triple-glazed windows. The interior also reflects this old-new combination, with light, open spaces, streamlined kitchen units and modern feature light fittings working side by side with oak and walnut antique furniture, bought through Ian’s new fine furniture business at Crimple Hall near Harrogate.

“We did a lot of research before the walls started going up,” says Elaine.

“Ian is very good at visualising everything in his head and working out how things are going to look, but I have to see everything in situ before I know whether or not it will work. We travelled all over the place taking photographs of houses we liked. I would knock on people’s doors to ask permission and it’s amazing how generous and helpful people can be with their time and information. Then I would go home and superimpose the houses onto a picture of the plot, so I could see exactly how certain bricks, roof tiles and designs would look.”

The build finally began in earnest in September 2014 under the experienced guidance of now retired builder John Sutton who was, says Ian, a “fantastic, old-fashioned bricklayer” and came recommended by architect Steve Johnson.

“The build was pretty straight forward with hardly any hitches, apart from the fact that the roof pitches were written down on the plans as being 45 degrees but were, in reality, 55 degrees. As a result, some of the walls had to be adjusted to compensate for the miscalculation,” says Ian. “The original design also included two balconies at the back of the house but these would have cost too much for our budget, so we decided not to have them. The builder was working to a fixed cost and we made adjustments and compromises along the way to keep within that cost.”

Although the house is not an eco-build, Elaine and Ian insisted on high levels of insulation and the inclusion of an air source heat pump, aiming to maintain a steady all-year-round temperature. For this reason they still haven’t decided whether to fit doors between the dining area and sitting room, but apart from this the house is virtually finished.

“We planned so far ahead that we knew where key pieces of furniture would go before we started building,” says Ian.

Every detail – from the angled kitchen island which continues a sight line from the hall to the garden, to a secret little cupboard behind the corner of the kitchen to keep the units flush on the other side of the wall – has been meticulously thought out and executed. And the icing on the cake for Elaine has been recognition of her garden design, which earned Marshalls building supplies both a regional and a national award for Best Use of a New Product (vitrified paving).

“It has completely lived up to all our hopes and expectations,” says Ian. “There is nothing we would change. It’s a great family house, we have lovely neighbours who bought our old house, and we love nothing more than sitting in the conservatory enjoying the amazing views. We feel very close to nature here.”

Ian adds: “We can see the sunsets, watch the wildlife, and experience the subtle changes of the landscape throughout the year, all from the comfort of our armchairs. It’s definitely a house for all seasons.”

Words and pictures by Heather Dixon 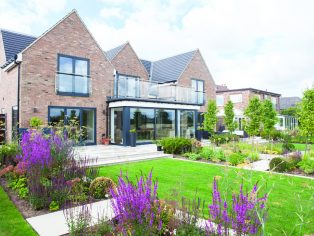