Work has officially started on a six-storey high-quality student accommodation facility, in the heart of Leicester’s city centre.

The Marble Street development, which was granted planning permission in February, will feature 61 rooms – a mix of shared and studio rooms – as well as a new student social hub, which will create a vibrant front to the city.

Designed by architecture firm CPMG Architects, and delivered by property developers Tang Developments and DAKO Construction, the new accommodation will sit next to the existing eight-storey iQ student block and will reflect the character and appearance of its surroundings with a bespoke and contemporary structure.

“We’re delighted to be working alongside Tang Developments and DAKO to deliver and bring a much-needed scheme to the city of Leicester. We’ve created a design that is both unique but also reflects the existing character of the wider environment and the street’s aesthetics. The scheme is located on previously developed land, which will help reduce the pressure of greenfield land for development and encourage residents to walk and cycle.”

The building’s new social area will open directly onto Marble Street, with three studio rooms provided behind these – each with a double bed, private bathroom, kitchenette and seating area, as well as individual gardens with views across the city.

“As an established property developer in the East Midlands, we’re pleased to be part of this project to deliver 61 new student homes. The professional team at CPMG has submitted an outstanding design of the building, which will provide a mixture of rooms to bring a range of students to the area.” 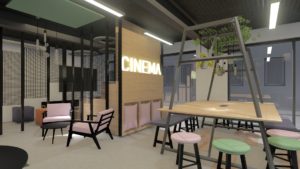 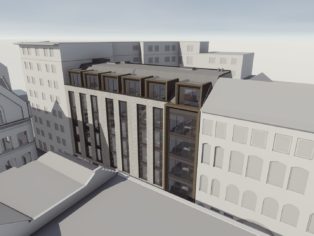