Award-winning project manager is source of pride for Bellway

A project manager building homes in Borehamwood has won not one but two prestigious awards for his work.

Steve Cutting has won two distinct awards with the NHBC, a National Health and Safety Award and a Pride in the Job Quality Award for his ‘excellence in on-site management’ at Bellway’s Hertsmere Mews development, off Shenley Road.

The National Health and Safety Award recognised Steve and his team at Hertsmere Mews as the national runner-up, meaning that Steve possesses the number one site team in the housebuilder’s current portfolio across the entire country.

The Pride in the Job awards celebrate site managers who demonstrate excellence and commitment to producing homes of outstanding quality.

More than 250 judges have judged 16,000 developments across the UK – and fewer than 450 site managers won a Quality Award.

Steve has led his team at Hertsmere Mews to be one of those deserving winners.

He said: “One of the things we pride ourselves on is a having a well-connected team and a happy atmosphere.

“If the workforce on site is getting on well that reflects on everything else.

“Everyone has been on board when it comes to health and safety at Hertsmere Mews.

“The sub-contractors who have worked on-site with us for the duration of the build programme has probably been the best group I’ve ever had to work with.”

The judging process for the Pride in the Job awards takes in a multitude of criteria, including foundations, structural work, surface finishes, construction planning and health and safety onsite.

“Here at Bellway, we are committed to building well-designed, sturdy homes which stand the test of time.

“Earlier this year we won our third consecutive five-star NHBC award which means that more than nine out of 10 of our buyers across the country would recommend Bellway to a friend.

“Winning this Pride in the Job award means that our buyers can be sure about quality on a local level too.

“We are very proud of Steve and his team and wish him the best of luck for the next stage of judging.”

The winning site managers will now be put forward for a Seal of Excellence award.

The winners will be announced on September 6.

The development in Borehamwood has also recently been highlighted with an award on behalf of the Considerate Constructors Scheme, which rewards best practice on-site. 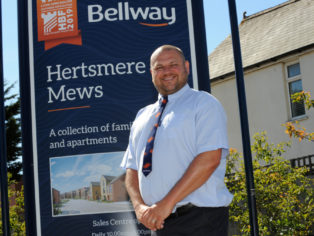