Less than one in ten of private rentals are pet-friendly properties but a new survey from Direct Line has shown that nearly half of landlords back the Government changes to allow ‘well-behaved’ pets in rental flats and houses.

A new standard tenancy agreement template announced by the Government earlier this year aims to prevent landlords from issuing blanket bans on tenants with pets, for ‘no good reason’.

Instead, consent for pets is the new default position and landlords will have to object in writing within 28 days of a written pet request from a tenant and provide them with a good reason for refusing consent.

But the proposal has hit various roadblocks with the pandemic slowing down Government business and letting agents have largely failed to adopt the new model tenancy agreement which allows pets.

The MP who proposed the changes, Andrew Rossindell spoke out to encourage uptake of the changes saying “An animal is a living, breathing creature with feelings and attachment to its owner. It’s not just traumatic for the owner if they their pet but can you imagine the trauma for the animal, particularly dogs, being taken away from the owner that they love and who cares for them.

“I think the current rules are cruel, they lead to horrible situations and I really hope that what I’m promoting here will lead to a better society and a better way of treating both humans and animals.”

One pet friendly landlord is supporting the changes and encouraging other landlords to adopt the scheme. Opening their first pet-friendly property, Vantage Point, in September 2016, the London-based apartment rental company Essential Living believes pets are a vital part of a home and a family.

Nick Woodward, Head of Lettings at Essential Living explained: “Unlike many other landlords and letting agencies, we have a flexible pet policy. We’ll sometimes ask tenants to attend a ‘pet interview’, where we will meet their pet just to double-check that it will fit in with the rest of the community and that it’s veterinary records are up to date.

“Since April, we have seen a huge increase of over 200 per cent in people viewing our ‘pet-friendly’ pages online compared to last year. Not only do dogs encourage daily exercise but they also help reduce stress and prevent loneliness during these isolated times. We are glad to have continued permitting dog-friendly access, but as more people have taken up pet ownership during lockdown, we hope to see more landlords weighing up the benefits.” 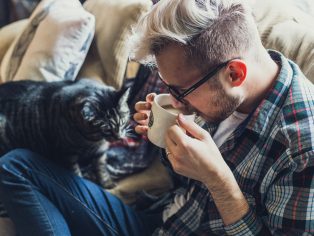