A new approach to healthcare that embraces the local community

When it opens, the £40 million, 90-bed Atherleigh Park Hospital will not be an isolated, hidden institution, but a restful, calming place that actively encourages engagement with local people.

From the off, AFL Architects and its client, the 5 Boroughs Partnership NHS Foundation Trust, have intended it to provide not only a superb medical asset but an accessible community hub for the people of Leigh in Greater Manchester.

Atherleigh Park’s superb health facilities are split across two buildings. One will provide a 24-hour psychiatric assessment service and in-patient care for adults suffering from mental ill-health. This will be through individual en-suite rooms in a male ward, a female ward and, a psychiatric intensive care unit. In the separate Later Life and Memory Service (LLAMS) building are a further 42 ensuite bedrooms for older people with dementia and memory-related conditions.

The hospital will also provide space for use by other mental health and related community service providers including charities, voluntary groups and housing organisations.

So, for the architects, the challenge was to design a building that has to work on three fronts: meeting the practical clinical and operational requirements of a modern hospital; ensuring patients and visitors feel at ease; and achieving integration with the community. No easy task.

The existing Leigh Infirmary hospital site was originally considered as the location for the new-build before it was moved to the 3.9-hectare vacated ground of Leigh East Amateur Rugby Club.

This is a relatively difficult site, constrained by Atherleigh Way, a busy 40mph dual carriageway, and residential areas to the east and south. Furthermore, it sits two metres below the road and required levelling due to a large east-to-west fall.

Taking the location and surroundings into account, AFL designed the hospital as two buildings linked by a central block. Phase 1 – the adults building – contains the mental health facilities and single-sex wards and will open in the autumn. Phase 2 – the LLAMS building – due to open early in 2017, holds the facilities and bedrooms for patients with dementia and other memory-related issues.

Nestling between both buildings is the hospital’s attractive, timber-clad central entrance block. This contains the main reception and a cafe for both patents and public with administrative offices situated immediately above it. Tall glazing allows daylight to stream into both levels simultaneously.

“We’d spent 18 months researching, consulting with service-users, patients and staff, and preparing drawings for the original Leigh Infirmary location and wanted the new building to benefit from features and concepts we’d developed, albeit in modified form.

“There is a lot of brickwork in the scheme to retain a low-key residential feel where the site borders housing, but we felt the entrance area and block should stand out.”

While most of the adults building has a pitched roof, the central block has a flat roof hidden behind a dipped facia splaying out in two directions. It is reached from outside the hospital via a long, glazed corridor with a raked top, which also interconnects with the wards and clinical areas.

“The exterior also has attractive, sustainably-sourced red cedar cladding over a Kingspan Tek structural insulated panel system (SIP), and by using ‘hit and miss’ mounting we have created an interesting rippled effect,” adds Milling. “There are a lot of shops and commercial buildings on Atherleigh Way and the main entrance design reflects that.”

Elsewhere the adults building has SIP and brick-clad exterior walls, while the LLAMS building has a traditional slate roof and external walls of Metsec steel frame cladded with brick but broadly follows the design themes of the first building.

The sheer of number of courtyards featured across both buildings – 11 in all – forms a strong element of the design. These include four therapy courtyards, four more gender-specific courtyards for the acute wards in the adults building, a central courtyard with public access behind the entrance building and two more in the LLAMS wing.

“The typology of the buildings lends itself to the creation of courtyards. At the very least they’re visually pleasant and calm areas and where they are accessible, with seating and planting they’re great for recreation, contemplation, exercising, therapy and for patients to spend time with visitors.

“We wanted to avoid installing fencing on the site, so all our courtyards are inward looking rather than outward facing towards the perimeter. Where possible, we’ve tried to wall-round the courtyards rather than fence them off – a modern interpretation of the traditional English walled garden.”

As part of the landscaping, a nature trail has been created around the perimeter of the site. This offers further recreational and meeting opportunities for patients and their visitors and softens the perimeter areas. It will also be available for use via a pedestrian entrance on the eastern side of the hospital.

Landscape Architects Fabrik have devised a scheme that’s a mixture of hard and soft landscaping areas, varied-level planting, and seating. While some of the planting will be completed when the hospital opens, the idea is that patients will become involved in selecting and carrying out further planting activities on the site as part of their therapeutic treatment.

Interior architecture and design has been given considerable thought, reflecting contemporary approaches to mental health services and dementia care which recognise the importance of these elements in the healing process.

From day one, the architects have been working closely with the trust’s members engagement group, comprising service users, ex-service users, carers, local councillors and local residents.

“We have a very good relationship with them and give presentations and explain what we are doing and they have had a big input to the design, which has been very important and provided us with a lot of understanding,” says Wendy Short, AFL’s senior interior designer.

“It is important that the hospital doesn’t have an overbearing presence for patients and visitors. We needed to maximise daylight, which is crucial in healthcare and utilised glazed curtain walling to maximise views out. The bright bedrooms offer a view of the nature trail or other pleasant areas through very large, slide-opening windows. Partly meshed-glass and partly clear glass they’re designed to allow fresh air in while remaining fully secure.”

The entrance area is a calm space designed to avoid causing confusion for those arriving and the rest of the hospital radiates out from there.

“We don’t want new arrivals to be faced with lots of people on seats, creating the discomforting feeling of being watched. So, the waiting area is separated out,” says Short. “Arriving at the reception, the large entrance to the pleasant public cafe area, overlooking the courtyard, is immediately apparent.

“When patients are off-ward they’ll move in the public areas such as the cafe. There is also a child visiting room and multi-faith room,” adds Short. “On the wards, visitors will generally see patients in the dining area of their wards.”

The adults building has seclusion rooms in each ward in case of emergencies, and there are destimulation rooms for agitated patients and therapy areas – essentially quiet spaces with soft lighting.

However, the trust is keen not to label rooms, so some of the day spaces have multiple uses – an interview room might also serve as a quiet space for patients, for example.

“To further enhance the ambience, we came up with the concept of decorating some walls with giant-sized photographs of natural scenery,” says Short. “The images of local places of interest have been selected by the trust, reinforcing the community feel.”

The hospital’s green credentials include LED lighting, low-E glazing, photovoltaic panels and use of natural ventilation outside crucial clinical areas.

“We’ve been on a big learning curve and kept an open mind. We’ve been listening to experts at Stirling and Nottingham Universities and Jenny Gill of Design in Mental Health who liaised with trust to produce invaluable design guidance for the project.

“In the landscape of mental healthcare and dementia care design there’s a great push forward and the rules are shifting all the time. You cannot afford to keep still and, where possible, we’ve tried to bring new ideas forward.

“With Atherleigh Park we’re handing something over we feel genuinely proud of. It really seems we’re making a difference by creating an improved environment for people facing mental health and memory-related conditions – and that feels good.” 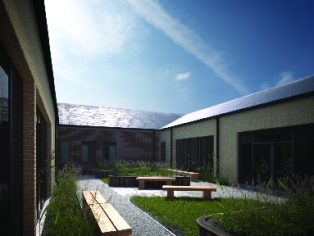 This aerial shot shows the hospital layout and courtyards with Phase 1, the ‘adults’ building’ and central reception, almost complete and Phase 2 under way © AFL Architects