Many people build their dream home with the vision of it being sustainable, opting to power their homes using renewable energy sources for a lifetime of low energy bills. One of the most popular choices for green heating systems are air, ground or water source heat pumps; particularly in off-grid areas where self-builders seek an efficient alternative to oil, LPG or electric heaters.

All heat pumps use the same basic principle of extracting heat from a natural source and passing it over a heat exchanger to obtain a higher temperature. Many people liken this process to a refrigerator working in reverse. Heat pumps use electricity to harness the latent heat from the source, but the amount of heat energy delivered is several times more than the electrical energy consumed, resulting in a high Coefficient of Performance (COP).

As heat pumps transfer rather than produce heat they are more efficient than traditional heating systems. What’s more, they are estimated to reduce electricity use (and cost) for heating by around 50 per cent, compared to electric resistance heaters and, when utilised properly, can also provide excellent thermal comfort. It is also possible to receive Renewable Heat Incentive (RHI) tariff payments for ground source and air source heat pumps, resulting in even greater value for money for the homeowner in the long term.

However, there is more to creating an energy efficient heating system than just a heat pump – the product it is installed with must also be selected for maximum value.

Heat pumps operate at lower temperatures than gas or oil boilers and therefore require a different system set- up. Historically, heat pumps have been partnered almost exclusively with underfloor heating. However, despite its popularity, underfloor heating does have its limitations. For example, it needs a wide surface area to get up to temperature, and therefore requires a large amount of water. For a standard low temperature 10 kW wet underfloor system, with a 45/35/20°C temperature profile, an average of 29 litres of water needs to be heated, which means spaces which utilise this technology can take several hours to reach optimum temperature and take just as long to cool back down.

Low-H2O radiators used in connection with fan assisted technology are ideally suited to low temperature systems. For example, in a similar 10 kW system, a low-H2O radiator can require just 3.2 litres of water – 90 per cent less than an underfloor heating system like the one mentioned above. The aluminium and copper alloy heat exchanger rapidly transfers the heat to the room taking only two minutes to warm up and achieve the same ultimate output. With less water being used, low- H2O radiators can respond faster than their higher water content counterparts, consequently consuming less energy.

Heat pumps can work well with radiators provided the system is properly designed. Heat pumps typically work at a temperature of 38-45 degrees, much lower than a standard gas or oil-fired system which typically operates at a temperature of 75 degrees. Radiators that are matched to a renewable system need to be large enough to emit enough heat at the lower temperatures which a heat pump works at. This leads to some installers “over sizing” the radiators, so, for example, fitting a three-metre radiator rather than a one metre low-H2O radiator.

The owners of Minstrels Barn in Caldwell, North Yorkshire chose to pair low-H2O Jaga Strada DBE radiators with a ground source heat pump when they decided to implement renewable technologies that would make the building sustainable for years to come.

“Minstrel’s Barn was previously fuelled through oil. We decided to install a ground source heat pump as an alternative, supported by the use of solar thermal energy (to heat domestic hot water and to pre heat the glycol up to 20°C), and set ourselves the target of achieving the most efficient closed loop ground source heat pump in the UK – with a coefficient of performance (COP) ratio of at least 6.5, which has been achieved by enhancing the brine temperature from solar integration.

“However, given the heritage of the building, we had to ensure that we retained its character. For example, keeping the original oak floor in some rooms, as well as decorative floor tiling in others, meant that underfloor heating wasn’t an option. Low flow, energy efficient radiators became the natural choice.

“Since the radiators have been installed, our energy bills have fallen significantly, and the house is lovely and warm 24/7.”

For self-builders looking for a sustainable, future-proof heating and hot water, heat pumps are a smart choice. However, to maximise the efficiency of the entire system it is important to look beyond underfloor heating at other technologies such as low-H2O radiators. 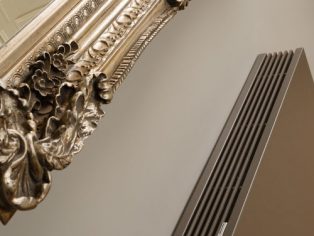