With the BBC due to demolish the corporation’s old Wales’ headquarters in Cardiff there will be few major examples of the architecture of renowned Welsh architect Sir Percy Thomas in the principality’s capital. One of those remnants is the Grade II listed National History Museum at St Fagan’s on the outskirts of Cardiff, whose preservation order made a major £21 million renovation project a difficult challenge for the design and construction team. Steve Menary reports.

The museum opened in 1948 and a visit to St Fagan’s is a rite of passage for most Cardiff schoolchildren. With more than 600,000 visitors a year, the museum is one of the most popular visitors’ attractions in Wales.

While those visitors came in search of history, the facilities needed to take a giant leap forward into the twenty first century.

“We are taking it back to its envelope, just the concrete frame and the brickwork, but it would have been much easier to flatten the lot and carry on,” says Ian Davies, project manager for main contractor Kier on the work to the Percy Thomas-designed main building at the museum.

The design work started at the turn of the decade after National Museums & Galleries of Wales secured the then largest ever award – of £12 million – from the Heritage Lottery Fund with the Welsh government also chipping in with a grant of £7 million.

Work started on the main building on 27 November 2014 with such a massive demolition and strip-out package that brought into question the validity of listing the building at all. For the design and construction team, this has provided a major challenge as attempts to provide virtually a new museum on a concrete frame erected in the 1960s from a Percy Thomas design that will be barely seen on completion of the £21 million make-over.

The plan was not just to completely revamp the building designed by Thomas himself, twice a former RIBA president who died in 1969, but to retain the existing concrete frame and silica brick, but also to build a new visitors centre, known as the Gweithdy, elsewhere on the site of the museum.

The refurbishment is a single project but two separate architects have been used for the two distinct elements. Fielden Bradley Clegg were signed up to design the Gweithdy, while the architect on the main building is Purcell Miller Tritton.

The existing building provided three main galleries: an agricultural gallery, a costume and textile gallery and another exhibition space known as Gallery One. The building also included a shop, cafe and restaurant and the main entrance that all needed a major makeover.

“It will create an exciting new visitor experience integrating national collections of archaeology and social history together in an open-air museum for the first time anywhere,” says Mike Lee, associate at Focus.

A line-up of major contractors were shortlisted to price the project with Kier beating Balfour Beatty, Bouygues and Galliford Try to the contract – but only after value engineering by the company reduced the cost by £1 million.

The savings included reductions to the size of the car park to reduced mechanical and electrical work and the main building will now cost around £14 million.

For Kier, such a major retention job has provided challenges, particularly when integrating this with the new design from Purcell Miller Tritton.

Working around the old design meant that one of the first jobs when construction actually started was to carry out a fer- rous rebar scan to work out how much vertical and horizontal rebar was in the existing concrete frame to then calculate how much weight the frame would take.

The answer was 400 kg per square metre.

“Our main challenge was that the site surveys we had were all old and we had to relate them back to a new grid. Some of the existing buildings were not even square to each other.

“Opening up the old building was a big challenge and we were passing a lot of info back to the consultants. There was a lot of exploratory work while we have been trying to build at the same time.”

Due to this complicated nature of the interface between the old frame and the new design, this produced a massive swathe of construction design portions (CDPs), which mean Kier take on board this element of the more detailed construction design.

Kier estimate that the CDPs cover about a quarter of the job. The CDPs ranged from a mechanical and electrical work such as security systems and rainwater harvesting to a louvred plant enclosure, cold rolled purlins and rails for cladding support.

While Arup are structural engineers across the whole project, with so many CDPs Kier employed a separate consult- ing engineer, Austin Partnership, to advise on this work.

The new design will provide a new metal deck Bauder sys- tem roof for the agricultural gallery, while a steel frame on the side of the existing building will provide a new space for the costume gallery plus a lecture theatre, toilets and better access.

Gallery One will be subjected to a soft strip out and refurbishment, while the old courtyard will be replaced by a new more distinct space in a striking part of Purcell Miller Tritton’s design.

The old inside courtyard was wasted space and the design for the new courtyard will bring this space into use with a steel portal frame, glazing panels and feature roof lights will provide the lighting.

The design by Purcell Miller Tritton also included exposed concrete as a nod to the original Percy Thomas building. The architects also specified a 25mm protrusion on the header bricks

Although there were two architects on the project, the rest of the design and construction team was the same across the project.

“There was a lot of overlaps on the design team,” says Kier’s design manager John Richards.

The Gweithdy will cost around £3.2 million and comprises a visitor’s centre of two floors. A basement will house toilets and plant, while the ground floor feature the exhibits. Gweithdy translates from Welsh as workshop and Fielden Bradley Clegg’s design specifies exposed beams from the steel frame. The frame will be attached to glue-lam beams, which have been specified not just as a part of the aesthetic but to form part of the support.

This is providing a challenge for Kier in ensuring the interface worked correctly, but the main construction

challenge on this section of the project has been coping with damp conditions and land drains across the site.

The museum features many examples of old Welsh buildings that were taken down brick by brick and rebuilt at St Fagan’s. The Gweithdy is being built on the site of the old Celtic Village, which has bene relocated.

Overall, the project is valued at £21 million with the construction costing £17.2 million and the balance of the cost coming from a fit-out project that will be commissioned separately by the client, but some of the exhibits will already be in the museum.

A number of standing stones, including a mill stone, plus a traveller’s caravan and a hearse will be brought into the main building before Kier’s construction team puts the doors on.

Construction of the Gweithdy began in January 2015. Work reaches a peak in November, when more than 80 workers will be on site. The Gweithdy should be finished by early next year with the main building ready by late summer 2016. Then, the museum will have facilities to match its standing as one of Europe’s most popular visitors’ attractions. 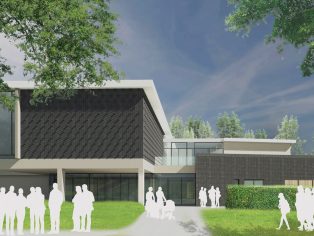 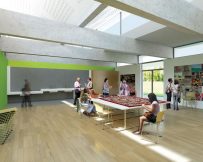 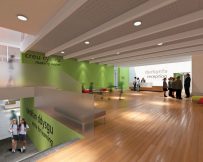 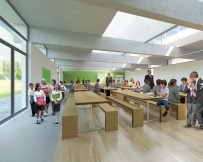