Since last September students of architecture have the opportunity to master their craft in a new building in the very centre of a European metropolis: at the École Nationale Supérieure d’ Architecture de Strasbourg (Ensas). The school has been in operation since 1987 at this location on the eastern edge of the historic centre, near the central station, in a 1950s building was once an automobile dealership. Now the addition to the architecture school is right across the street from it; the intention was that the new structure be a gesture, opening up toward the city. The design by Marc Mimram, which was selected in a competition, has accomplished that goal. Numerous views in and out of the building connect it to its surroundings; these include the fully glazed plinth, a semi-transparent aluminium skin cloaking the glazed “boxes”, unusually large windows, and a roof terrace. The striking building massing consists of two-storey blocks stacked one upon the other – the lowermost block cantilevers beyond the ground storey, while the uppermost block steps back – and is derived from the zoning regulations and the existing eaves height. Mimram, who is both architect and engineer, devised a steel structure whose form is as sophisticated as its outer skin. With the changing incidence of light, the aluminium skin transforms from a dark-grey opaque surface to an iridescent pattern made up of lines. 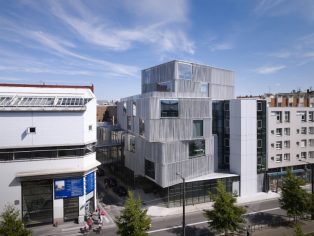 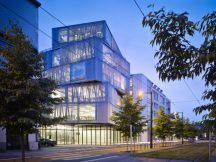