Built by Midas Construction for Bristol City Council to mark Bristol’s status as European Green Capital 2015, the 40,000 sq ft of workshop and office space was created to provide a new sustainable home for small and medium sized businesses in the City.

The building features a sedum green roof and sky garden, which was a suggestion from people in the local community, who were encouraged to bring their own sustainable ideas to life. The green roof provides a wealth of benefits to the environment and can last longer than conventional roofs.

The project has also financially contributed to Bristol’s Tree Pips initiative to involve primary school children in learning about and planting 36,000 new trees across the City.

The area chosen for the building of the business park was a brown filed site with a huge amount of concrete on it due its former use as an airfield hanger. Even before the building work began, Midas ensured that all the pre-existing concrete was reused on site, saving hundreds of tonnes of waste going to landfill.

During the build, Midas used high performance building materials which reduced energy demand by 30 per cent. Midas also used Advanced Waste Solutions for all waste on site and produced a monthly report of all waste collected. At the end of the build, Midas had diverted 99 per cent of construction waste away from landfill, having set themselves a target of 80 per cent at the start of the work. 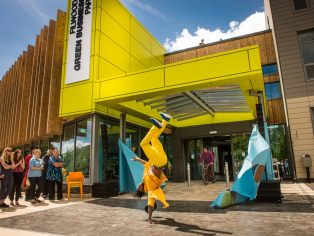