Having outgrown its former office space, the charity – which helps disadvantaged young people through hands-on counselling and training – enlisted HOK’s help to refurbish Bute Mills, a 100-year-old former flour mill in the centre of Luton. The charity recently moved into Bute Mills following the launch of the building, which was attended by the Archbishop of Canterbury in November 2015.

The renovated centre expands Youthscape’s capacity to develop new programmes and enables it to serve more young people. The charity predicts that the facility will become a national hub for innovation in youth work, encouraging youth workers and teachers to collaborate and inspire new ways of assisting young people.

The renovation of Bute Mills’ interior has created a flexible environment including:

HOK designed all of the spaces to create a relaxed, informal environment that promotes effective training, education, social and counselling activities. Graphics and photography also play an important role, reflecting the brand and reinforcing the Youthscape messaging.

The team used sustainable design strategies to create a healthy environment for the charity’s young people, staff and volunteers. Several energy conservation features, such as natural ventilation, reduce operating costs. Timbers that were removed from the roof to help open up the space, were reused both in the new reinforced structure and in the creation of the Ground floor reception desk. The team specified Forest Stewardship Council-rated timber flooring, low-volatile organic compound products including water-based paints and low-energy, light-emitting diodes (LEDs).

“Not only has HOK produced a brilliant design, but the team has brought on board many other designers, engineers and suppliers who have been extremely generous with their time, expertise and products,” said Fiona Green, Youthscape project manager and Luton Borough councillor.

“The nature of this project, as a volunteer effort, has meant that the entire team, from the consultants and contractors to the supply chain members, has taken a highly collaborative approach. This team effort, which included close consultation with Youthscape, has resulted in the successful delivery of an important building that embraces the gritty urban aesthetic of this industrial environment appealing to the young people the charity serves.”

A specially commissioned feature wall by Jason Bruges Studio provides a distinctive arrival experience in Youthscape’s ground floor reception area. The feature wall, which makes reference to Luton’s heritage as a centre for vehicle production, incorporates car parts, sourced from a local manufacturing company, that light up in response to movement within the reception space.

The importance of the project was also appreciated by one of HOK’s clients, publishing group Hachette UK, which donated books to populate the building.

The project was completed as part of the firm’s HOK 24 / SIXTY community service initiative, in which, to commemorate its 60th anniversary in 2015, HOK’s leaders challenged each office to donate at least 60 hours of design services. With some projects continuing into 2016, HOK’s people in 24 offices will have contributed over 4,000 hours—2,500 more than the initial goal. The new HOK 24 / SIXTY report illustrates the firm’s commitment to making a difference. 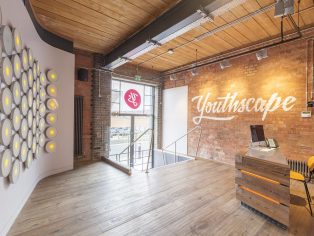 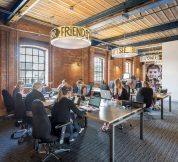 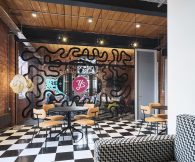