Work gets underway this week on an innovative redesign of Queens Circus Roundabout in north Battersea which will separate cyclists from other traffic and provide new pedestrian crossings.

The cycle friendly scheme is thought to be the first of its kind in London and has been developed in partnership between Wandsworth Council, Transport for London (TFL) and Battersea Power Station Development Company (BPSDC).

The project is one part of an ambitious plan to overhaul large sections of the street network in Nine Elms on the South Bank to prepare the former industrial area for a major increase in the residential and working population. The long-term aim is to make Nine Elms one of the most cycle and pedestrian friendly districts in central London.

The roundabout works are being funded by nearby development sites and managed by Blu-3 who work for the developers. The project will be undertaken in phases and is expected to finish in summer 2015.

“This is an innovative design and we expect it will be the first major roundabout in London which separates cyclists from other traffic in this way. There will be segregated cycle lanes and the points at which riders cross the road will be controlled by traffic lights to avoid any potential conflict. We hope this will be a blueprint others can follow.

“We’re able to provide extra space for the cycle lanes by reducing the size of the roundabout’s central island. This means the space for other traffic is maintained and overall traffic can be better managed through this busy junction.

“In Nine Elms we are redeveloping an entire district of the city which provides a unique opportunity to plan and deliver an exceptional new transport network. But we also asking drivers, cyclists and pedestrians to take extra care while the work is on-going.”

“London is embracing cycling like never before, with world class races taking place throughout the summer and new cycle routes now being planned and delivered across all 33 boroughs.

“These ambitious and innovative plans for Queens Circus will deliver improvements for cyclists while also making the environment better for pedestrians and other road users, helping deliver the wider aspirations of the Mayors Vision for Cycling.”

The roundabout is located at the western end of Nine Elms regeneration area, next to Battersea Park, and the improvements are needed ahead of a major increase in local residents and workers.

The roads will remain open for the vast majority of the project but there will be a need for temporary traffic lane and pavement closures as well as changes to bus stop locations. 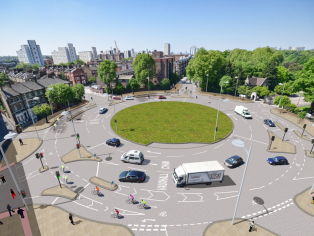