With Scorpion™, all smoke detectors in a building can now be safely and efficiently tested every year

Scorpion is a new functional smoke tester that solves the problem of testing hard to access smoke detectors and ASD systems. Testing these devices can often attract high costs and significant disruption which in some cases can even lead to the detector being untested.

Buildings must be designed with maintenance of the fire system in mind, and this sometimes restricts the creativity of building designers, or means that buildings become costly to maintain once in use. Smoke detectors could be installed in void spaces above ceilings or behind architectural facia, high atria, or in lift shafts.

Testing of these detectors has historically been a challenging task; often attracting high costs and significant disruption, or in many cases the detectors remain untested.

One such example was in the library of a leading UK university, where the lighting in the stairwell was being replaced with longer life and lower power LED lights to improve the buildings energy efficiency. The longer life meant the maintenance costs would be reduced as scaffolding would be needed less often to change the lights. However, the stairwell was protected by a point smoke detector in the ceiling void above the lights that would still need testing every year, hence negating some of the savings made by the longer life LED lights.

The university and their maintenance contractor took the opportunity to install a new system for testing difficult to access point or aspirating smoke detectors during the refurbishment – Scorpion®.

Engineers on site installing and testing the detectors were amazed at how simple the Scorpion system was to install and how quickly they were able to conduct the tests. Testing of the detector in the void space now takes a matter of minutes, with no need for access equipment or restricting user movement at any time.

Similar testing problems can be found in a number of locations such as secure areas within a building (archives and storage areas, IT server rooms), or in buildings with heavy use such as universities, hospitals, or transport terminals. 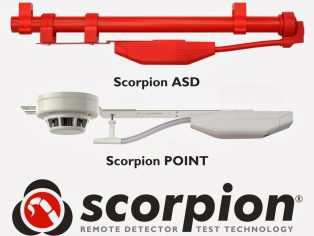