Will London get a cloak of conscience? Huge sculpture seeks home in London

Anna Chromy, an artist with 60 sculptures standing in public places across Europe, has recently been honoured by China with the first solo exhibition by any western artist at the National Museum in Beijing. But the Monaco based artist is hoping that London will offer her masterpiece, ‘The Cloak of Conscience’ a home.

Her association with London goes back to 2012 when the President of the British Olympic Committee, Lord Moynihan, invited Anna to design the sculpture for the athletes Olympic village which was thought by many athletes to be lucky and as such was much touched during the games. It stood in front of the Team GB accommodation. Her artistic awards include: the Prize Salvador Dali, Kafka and Masaryk and the much coveted Premio Michelangelo, the first time it was awarded to a woman.

Anna is the quintessential European, a Czech who grew up in Austria and is now based on the Mediterranean in Monte Carlo. She is perhaps best known for a monumental 50-ton work in blinding white Carrara marble titled ‘The Cloak of Conscience’, so big that admirers can walk inside it and use the space for contemplation. The marble comes from the same quarry that produced the five-ton block from which Michelangelo produced his famous statue of David. This huge ‘Cloak of Conscience’ is now seeking a permanent home.

One can criss-cross Europe and never be far from an Anna Chromy sculpture – she has more sculpture on public display than any other living artist. They range from Jerusalem to Luxemburg, Stuttgart, Prague, Salzburg, Munich, Monaco, Milan, Menton, Pisa, Florence and Bologna and for two months in 2005 her works dominated the Place Vendome in Paris. In Portofino, Italy, her “Dancer” graces the famous yacht harbor and in Pisa the Myth of Sysiphus stands as the symbol of the University.

“My work starts with respect for the classical sculpture of Greece and Rome as well as that of Michelangelo and Bernini, the spirit of humanity and our relationship to nature that is central to their work is what drives my own creative process.”

As a student at the Academy of Fine Arts in Paris she met Salvador Dali.

“One day our class was invited to meet the Master at Hotel Meurice, in order to show our first works. There he was sitting next to his wife Gala, my undisputed hero and example to follow in my art. When it was my turn to show a painting to the Master he took it in his hands and disappeared for a moment into another room. When he reappeared he commented the work with the words:  “You are not a woman. This is the first time I see a woman paint like a man. Knowing his opinion that women were lacking creativity, I took this as an enormous compliment.”

A painter for many years Anna suffered a catastrophic accident in 1992, which had a profound effect on her. It sent her in an entirely new direction as she recovered, that direction being sculpture. And the move to sculpture has created something monumental – the Cloak of Conscience.

In June 2005, the Abbot of the Holy Monastery of Saint Francis in Assisi asked Anna if she could conceive the Cloak as a space of meditation, according to the words of Saint Francis,

“To use in the absence of a consecrated space our own body as a place for prayer and contemplation”.

This was the moment that launched the project that Anna had cherished since her first painting of the Cloak, – to create the “Stone-Guest” as a universal symbol of conscience in a dimension never attempted before. To carve this chapel into one single block of white marble Anna had to wait for a whole year until she received on Christmas Eve 2006 the news that the famous Michelangelo quarry in the Apuan Mountains in Tuscany had finally given birth to a piece of marble weighing 250 tons.

The Chinese have fallen in love with her work and honoured her with the first solo artist exhibition for a Westerner at the hugely prestigious National Museum which fronts onto Tiananmen Square. This fantastic compliment follows on from a previous Chinese visit where Anna was the Guest of Honor of the Guangzhou Arts Fair. Her sculpture, the Violinist Player was displayed on all official announcements, posters and programs.

In Europe, one of Anna’s well-known public works is of the Austrian Conductor Herbert von Karajan which stands in front of his birthplace in Salzburg. It was unveiled in 2001 in the presence of his widow Eliette von Karajan, the President of the Salzburg Music Festival, and the Vienna Philharmonic Orchestra with Ricardo Muti. In 2003 Anna was awarded the “Prize Salvador Dali” and the “Kafka Medal” from the Europe Foundation in Prague – previous recipients include the movie directors Steven Spielberg and Milos Forman.

Anna Chromy detests immobility as a symbol of death wrote the art critic for Le Figaro, Philippe Cruysmans, and indeed her love of music and dance is much in evidence in the movement of her statues. Salvador Dali once said:

“Lack of movement is the least one should expect from a statue.”

And indeed Anna’s sculpture takes that minimal requirement to its ultimate – her sculpture may not move but they certainly don’t lack movement. 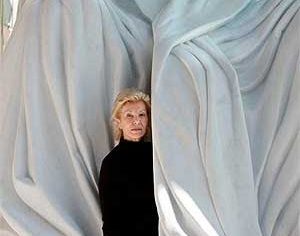