Oxford University’s Weston Library, home to some of the nation’s most valuable literary treasures, will reopen on 21st March 2015 following an £80m renovation by leading architectural practice Wilkinson Eyre.

Part of the University’s world famous Bodleian Library, the Grade Il listed building (formerly the New Bodleian) was originally designed by Sir Giles Gilbert Scott in the 1930s. Situated opposite Nicholas Hawksmoor’s iconic Clarendon Building and Christopher Wren’s exquisite Grade I listed Sheldonian Theatre, its renovation is at the heart of an ambitious period of renewal of the Bodleian’s facilities aimed at safeguarding its vast and unique collection of books and manuscripts.

The much-anticipated project has created high-quality storage for the Libraries’ valuable special collections, which have been preserved for scholarship; developed the Libraries’ space for the support of advanced research; and has expanded public access to its great treasures via its new exhibition galleries and a lecture theatre.

By opening up the building to promote its special collections to the wider public, Wilkinson Eyre has also addressed the building’s identity and related it more closely to its immediate context by improving its perception and approach. Once described as a ‘dinner jacket made of Harris Tweed’, the Weston Library is now successfully connected to the core Bodleian buildings.

The new Blackwell Hall, supported by a £5m donation from Julian Blackwell, is a publicly accessible, top-lit 13.5 metre high space which forms the heart of the new library and features a café, information desk, a 16th Century tapestry map (the Sheldon Tapestry) and a 15th Century gateway on permanent loan from the V&A Museum.

The gateway originally led to the garden of the historic Dorner family’s estate at Ascott Park in Oxfordshire and was the only surviving structure following a fire in 1662. With the support of Oxfordshire Buildings Trust, the incorporation of this gateway sees this grand piece of architecture returned to its original home county in a new and unique setting, emphasising the theme of old and new that runs through the entire building.

Blackwell Hall opens up to two new exhibition spaces and a café, creating an enticing proposition and welcoming experience for the general public, being directly accessible through the new public entrance on Broad Street.

Exhibition galleries have been added, along with other new facilities including a Digital Media Centre, a Visiting Scholars Centre, a lecture theatre, and a suite of seminar rooms to enable teaching and master-classes based on the library’s special collections. These facilitate contemporary research practices and techniques, supporting the library’s academic users, as well as enabling public interaction with the library’s collections and treasures. The newly refurbished library includes world-class conservation workshops and facilities, where collections can be preserved in a secure and environmentally stable setting. The Bodleian’s Special Collections experts will now all be co-located in the building with their Conservation colleagues, as will the Centre for the Study of the Book.

Whilst carrying out the refurbishment and enhancement of this iconic library building, Wilkinson Eyre has addressed major challenges with its infrastructure and upgraded its facilities without compromising the building’s charming, historic character. Scott’s original design replicated the typology of an Oxford University college but with the traditional quadrangle space in the centre occupied by an 11-storey book stack based around a large complex of unprotected steel framework.

With the New Bodleian previously struggling to meet national standards for the storage and exhibition of archival documents, Wilkinson Eyre’s renovation has now provided a safe repository for the nation’s literary treasures. The architects have revised the layout, removing the upper floors of this colossal central stack, and replacing them with a dedicated reading room and suite equipped with the latest research facilities. The three-storey stacks underground have been partially rebuilt and upgraded to modern archival standards, and for the first time, controlled shafts of daylight permeate into the heart of the building.

The highest storeys of Scott’s original building, hidden during the 1960s by an extension, have been re-instated and restored to include a new reading room boasting the best views of the city’s iconic spires. The slit windows arranged in rows, through which the spires are visible, are a signature Scott feature and a key expression of the building’s 1930s character. Scott was renowned for embracing modern building techniques and glazing in the building, including the slit windows, were the first large-scale use of anodised aluminium in the UK.

Particular care has been taken to restore and match Scott’s high-quality craftsmanship and original materials palette. From stone to metal to plaster, as well as joinery and furniture, Wilkinson Eyre’s attention to proportion, materiality and light in the new spaces gives rise to a quiet, scholarly gravitas emanating from this previously unloved building. 140 tonnes of salvaged stone was re-used in the new façades and external stonework — including two angels holding the University of Oxford coat of arms, and the bust of Bodleian Libraries’ founder Sir Thomas Bodley above the King George VI door — has been expertly cleaned and repaired. The ‘tour de force’ of original joinery is the main reading room, including a decorative, inlaid timber ceiling, which mimics Native American and African designs in a stylised Art Deco manner, and has been cleaned and restored to its original splendour. New bespoke additions such as shelving and tables have been designed and specified sympathetically. 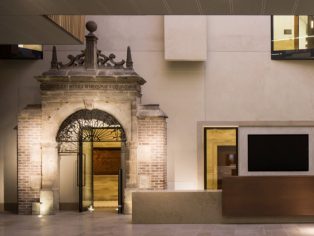