Roof slates from Welsh Slate feature on a refurbished building at the heart of the regeneration of Kings Cross.

Some 6,400 natural slates from Welsh Slate have helped restore to its former glory the roof of the first purpose-built gym in England, albeit now as a designer restaurant.

More than 600m2 of Welsh Slate’s 500mm x 300mm Penrhyn Heather Blue County-grade slates have been used on the main and clerestory roofs and flank roofs of the dormer windows of the Grade ll listed German Gymnasium – a landmark in the King’s Cross regeneration masterplan.

They were specified by architects Allies and Morrison to return the roof to its former appearance after the original Welsh Slate roof (which is an important early example of the use of laminated timber to enable broad spans) was removed and the building was left with only a bituminous felt covering across the structure. They also match the slate roofs of the adjacent St Pancras Station and Great Northern Hotels.

The new roof over trusses up to 20m wide was installed over four winter/spring months by Attleys Roofing who were reliant on multiple, small deliveries due to the tight site, lack of storage and range of materials required to bring the roof up to today’s standards – insulation, vapour control layer, counter battens, felt, battens and Welsh slates.

After a 17-month rebuild the renovated building was officially opened to the public by restaurant group D&D London in November (2015).

Originally designed by Edward Gruning and built in the 1860s, the German Gymnasium was influential in the development of athletics in Britain. The building cost £6,000 and was funded solely by the German community in London with the intention of promoting strength-based gymnastics for men and women. The National Olympian Association held the indoor events of the first Olympic Games there in 1866 and they continued there annually until the White City games in 1908.

After the First World War the building was taken over by the Great Northern Railway and converted to offices, being sub-divided into cellular offices, with first floor, staircase and internal partitions inserted to divide up the overall single volume.

It remained in the ownership of the railway operators under various acronyms until it was drawn into the overall masterplan for the redevelopment of King’s Cross. The earlier demolition of the buildings around it and the emerging context have allowed the public realm surrounding it to become a more dynamic space, the building becoming both a way-finding landmark and a destination in its own right.

Allies and Morrison were commissioned by developer Argent to restore and repair the fabric of the building to a shell and core finish to enable subsequent fit out by one of three shortlisted restaurant operators. Conran and Partners established the restaurant concept design and completed the fit-out which includes a new steel mezzanine and staircases.

“The design of the roof is complicated by the increased depth of the new roof build-up in that the additional thickness of the roof sets the new slate tiles above the level of the brickwork details of the existing gable parapets.”

“To resolve this, our design approach separates the slates from the brickwork by introducing hidden gutters, valleys and leadwork detailing around the perimeters of the roof. These details are adapted into various different forms due to the variety of conditions found within the existing roof and the deformation of the timber roof structure over time but reconcile the precisely constructed new roof elements with the unevenness of the Victorian brickwork.”

“Welsh Slate provided technical advice throughout the design phase through telephone consultation and product literature. The slates could be used in a consistent tile size with even colour and their fixings hidden by the overlapping of each tile. We were also able to resolve design problems using the integrated and unobtrusive service penetrations, which are pleasing architecturally and from a conservation perspective, by avoiding the need for a proprietary vent pipe protruding above the pitch of the roof.”

“The Welsh Slate has provided the aesthetics required by the client and the architect and at the same time has kept it in keeping with the area. Everyone is really pleased with the roof.” 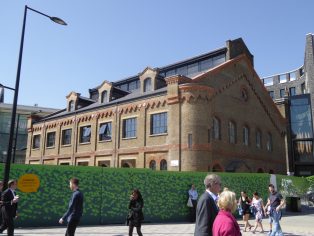