Dundee’s grand new railway station includes a 120-bed hotel and is destined to be an impressive gateway to the city and its historic waterfront. Ray Philpott reports.

The city of Dundee is entering a bold new phase in its history, creatively reinventing itself and embracing its 21st century, post-industrial status.

At its heart is the five mile-long central waterfront area along the River Tay, once purely home to its heavy industry and docklands, and now being reborn as a cultural, commercial and residential centre, alongside continued dock and industrial activity in the east.

In 2001 the Dundee Partnership, chaired by Dundee City Council, developed a master plan to turn this underused asset into a high-quality urban quarter for Scotland’s fourth largest city.

Its long-term vision includes a mix of residential, retail, hospitality, hotels, business offices, leisure amenities and tourist attractions in the central zone, the £513m focal point of the development covering 5.5 hectares. Marinas, green spaces, homes, industry and technology feature in four other zones. Roads and infrastructure have been largely established and construction is progressing apace.

Star tourist attractions like the historic three-masted sailing ship RRS Discovery, which carried Scott of the Antarctic and Earnest Shackleton, and the new Victoria and Albert Museum (V&A) due to open in 2018, are expected to attract visitors from across the UK and abroad.

However, in the 1960s, Dundee’s waterfront and station were effectively cut off from the rest of the city by heavy-handed, vehicle-focused road building and parking developments, particularly around the Tay road bridge.

To reconnect the city with its riverside, dramatic changes have been made to the isolating roads and car parks and, significantly, the 1960s station building which was demolished to make way for a new ‘statement’ station, acting as a high-profile gateway between the city and its waterfront.

Built over the top of four tracks, the station complex’s imposing height and presence, combined with two attractive, glazed arches at ether end of its concourse, give it the strong presence needed. It is both an eye-catching gateway to the waterfront and a substantial railway station that reflects the status of the city.

Partner Willie Watt takes up the story. “Dundee is a busy commuter station and is served by the arterial East Coast Main Line, yet the 1960s station was suburban in scale and style and didn’t fit in with the waterfront vision.

“The new building had to be very different and in proportion to the scale of waterfront development. It’s intended to be an imposing development”, he says, “visible from the railway, the new waterfront road network and from the west as you drive in to Dundee, acting as gateway to the city from that direction too. You can clearly see the glazed arch ahead when travelling in any direction.”

“This is a deliberately modern station building with a cafe, a ground-floor retail space on the plaza and an office unit. We wanted the concourse to have a strong presence for people and be very clearly part of the railway, a celebration of rail travel. The railway heritage is firmly captured through the arched design, which is also reflected in the shape of building behind.”

The main concourse entrance faces the plaza where buses can be caught, while two west-facing entrances also connect to taxis and car parking facilities which include a small car park and a large multi-storey one five minutes walk from the station. However, the station complex is designed to encourage travel on public transport and reduce car usage.

On the lower level, which is accessed by escalators, the Victorian platforms and their associated fixtures and buildings have been retained. The city once had three attractive Victorian stations but the buildings were swept away in the 1960s redevelopments.

While Dundee station is undeniably contemporary, when it opens next year it will be the first city station in the UK to be built with an integrated hotel since the early 20th century.

“Mixed use stations like this are not common in Scotland. To a great extent, the hotel actually dictates the scale of the building. Without it the station would probably have been an architecturally smaller building,” explains Watt. “It has its own separate, fully glazed feature entrance at the northern gable end of the curved structure, although the main station entrance is designed to be more predominant.”

The other major substantially glazed element of the building is the cafe on the ground floor offering views over to the Discovery and the V&A and right along the Tay. Customers will be able to see from the mouth of the estuary all the way to Perth.

“It will benefit from the footfall from the station and visitors to the attractions, but its superb vistas, and great location we like to think it will become a destination in its own right,” claims Watt.

The plaza effectively creates a public space in front of a large civic building and the architects have been working closely with Dundee City Council to ensure everything is co-ordinated between the building and the public realm around it.

“It has high-quality paving and soft landscaping arranged in an urban style with seating, easy access to bus stops and all the ingredients you would expect in a large open space. It will be a lively space, but the key thing will be its functionality,” says the architect.

“Dundee City Council is doing an incredibly good job at managing the overall waterfront development and selling the city – it’s a great catalyst for positive change, and they are indeed making it happen.”

Graham Steel, senior associate with the practice, explains the thinking behind the structure and materials used inside and outside the building.

“We’ve tried to create architectural mass by using materials that make it read as a solid building. There’s solid granite all around the base of the building, which has a robustness that grounds it and reflects the materials used in the public realms. Above the granite line there’s terracotta cladding, and on the western side aluminium there is cladding on a cassette system.”

“The arch is a piece of statement design. Due to the curve of the building, the interior ceiling is fluid, shapely and very 3D,” explains Steel. “It’s constructed from a concealed frame with a tensile material stretched over it, creating a smooth texture and a sleek and sculptural look. We’re creatively and elegantly illuminating it from the ground to make it glow at night and capture its sculptural nature.”

With large amounts of single glazing at both ends, the arch lets in lots of light to the concourse which is glazed into the cafe, ticket hall and retail unit. On ground level it’s glazed on all four sides, and the arch sits above that.

“It was important to control daylight coming in especially from the west. We modelled that in detail using BIM to get the LED lighting correct and to avoid glare. Solar was gain kept to a minimum because of north east-facing glazing and the arch on the western side has more shading to control the light.

“A number of different types of glazing have been specified, depending where the glass is and what its functional requirements are. On the floor terrazzo-style tiles meet Network Rail’s specifications and branding for the station.”

Deep piling was necessary in ground reclaimed from sea by the Victorians. The steel structure then arches above the piling while a steel ‘bridge’ ties the bottom of that arch together. Above and around that is a more traditional steel and cladding structure.

Ultimately, Willie Watt and his colleagues are very pleased with the overall outcome and the way the project has progressed.

“We’ve developed a very good relationship with the lead consultants Jacobs, and its been a great team effort,” he says.

“The big challenge for us has been to strike the right balance, to design a gateway that’s right for a re-emergent Dundee. It would have been very easy to underplay or overplay that, but to my mind, we’ve struck that balance just about right.

“This new station suits the city because, while it successfully manages to be striking and civic, it achieves that without being grandiose.” 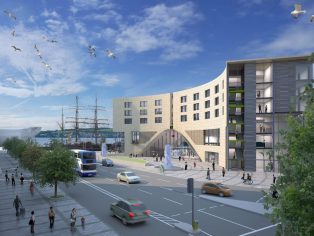 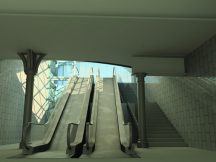