The regeneration of the Alton area in Roehampton has moved a step closer after the Secretary of State for Culture, Media and Sport confirmed that Allbrook House and Roehampton Library will not be listed as buildings of ‘special architectural or historic interest’.

The minister’s final verdict, which was issued yesterday, follows a report by Historic England (formally English Heritage) which concludes that the two buildings are not of sufficient quality for protected status.

Allbrook House and the library are located at the gateway to the Alton Estate, a site which has been earmarked for new homes and modern community facilities including a new library and village green. If they had been listed this key part of the Alton Area Masterplan would have to have been rethought.

The minister’s decision means the council can now proceed with its plans to revive the neighbourhood which have been developed in close consultation with local people and stakeholders over the last two years. The proposals have the unanimous backing of all Wandsworth councillors.

“We are pleased that both the Secretary of State and Historic England share our view and have rejected the listing application. We can now put this expensive waste of time behind us and get on with developing the plans to improve this area and providing the new homes and modern community facilities local people want.

“The fact is that Neither Allbrook House nor the library match the quality of the other protected buildings on the estate. They were not executed as originally planned and create an awkward, unattractive and poorly functioning entrance from Roehampton Lane. At ground floor level they provide dark, isolated spaces which attract anti-social behaviour and cause local people real concern. Common sense has prevailed.”

The council’s plans for the Alton area include replacing many outdated homes with high quality properties set around a much improved environment, a stronger local economy and with modern community facilities. All existing council tenants and homeowners living on the estate are being offered the chance to stay and share in the area’s revival.

Over the course of this project hundreds of additional properties would also be built, including more homes for social rent and shared ownership.

For more information and to sign up for e-newsletters all about the regeneration project visit www.wandsworth.gov.uk/roehampton 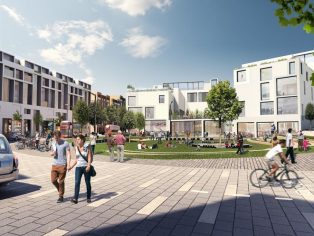 impression of how the space could look following the regeneration programme