Waldeck, which has 11 offices across the UK, has been appointed to undertake the civil and structural engineering work on a £9million redevelopment project in Lincoln.

The Waterside Shopping Centre on the High Street is being remodelled to increase the trading space in the hope of attracting larger retailers to Lincoln.

Existing retail units and escalators at the rear of the centre are being repositioned and the arena area will be filled in to create two double height shop units over the main two trading levels. This will provide a 22,000 square foot (sq ft) store for H&M and a 15,000 sq ft store for Next.

Further enhancing the shopping centre’s fashion offering, New Look will enlarge and reconfigure its existing store, taking it from approximately 12,000 sq ft to circa 14,000 sq ft.

The food court will move from the first floor to the lower ground floor ‘Waterside level’. The plans also include improvements to exterior signage for south facing and high street areas.

Waldeck Project Leader Andrew Foottit said the development will take up to 15 months to finish and will be done in phased completions.

“We’ve undertaken the necessary feasibility studies and have just started work on site. To enable the centre to remain open to shoppers throughout the planned works the project will be carried out in three phases, the first of which will be the extension of the New Look store.

“Capital & Regional has an exciting vision for the Waterside Shopping Centre and needless to say Waldeck is delighted to be involved. We have a great deal of experience in the sector and have worked alongside LK2 and Simons Construction on similar projects including a £4million extension at The Cheshire Oaks Designer Outlet in Ellesmere Port which is currently underway.

“Although there will inevitably

be some disruption we’re members of the Considerate Constructors Scheme and are committed, along with the other partners, to minimising the impact on retailers and shoppers.” 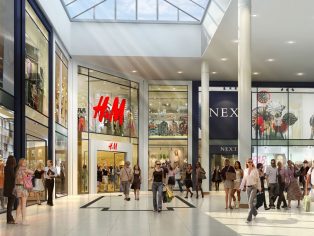