Ten innovative designs addressing some of the world’s biggest challenges have won awards from the World Architecture Festival (WAF). The 2019 WAFX Awards, supported by sponsor GreenCoat®, celebrate proposals from across the globe tacking subjects ranging from ageing and health to cultural identity and carbon reduction. This year’s category winners include a humane prison design in Belgium which challenges traditional layouts; a ‘horizontal’ skyscraper in the heart of Moscow which re-uses existing buildings; repurposed oil tanks creating a new river-front park in Brooklyn; and a pedestrian-focused ‘urban living room’ for the UAE’s longest road.

The winning schemes will be on display at the World Architectural Festival in Amsterdam, which takes place from 4 to 6 December. The overall 2019 WAFX winner, chosen from the category winners, will be presented at the WAF Gala Awards Dinner on Friday 6 December at the Beurs van Berlage.

“This year’s winners display high levels of ingenuity and lateral thinking, and demonstrate the power of design and designers to tackle the world’s big problems in ways that can turn them into opportunities.”

Anke Meyer, Corporate Marketing SSAB commented: “For the 3rd year GreenCoat® is proud to support the WAFX awards and the innovative and forward-looking architectural concepts they showcase. By addressing key challenges architects will face in the coming years, these projects are perfectly aligned with SSAB Swedish Steel’s own initiatives and ambitions. We look forward to welcoming all of the WAFX category winners at WAF and presenting the trophy to the overall winner.”

The WAFX 2019 Category Prize Winners are:
Water and Food joint winners: Ulsoor Lake by Arup and The Tanks at Bushwick Inlet Park by Studio V Architecture

Ulsoor Lake by Arup
Ulsoor Lake is one of the largest remaining open spaces in Bangalore, however it has not been developed in line with the city’s rapidly increasing population and is subject to many pollution threats. Arup’s masterplan is for a holistic strategy, encompassing landscape design, ecology, engineering and socioeconomics, to help the lake and its environs recover from this neglect, while re-engaging the community to support its preservation. The strategy recognises that pollution must be tackled at source, and that a phased approach to regenerating the lake is critical; continually moving towards the end goal of a catchment-wide suite of interventions to improve sanitation, drainage, stormwater management, and promote walking, cycling and ecological value. In the future, the polished water will form a backdrop to vibrant city life, celebrating the innovative future of Bangalore.

The Tanks at Bushwick Inlet Park by Studio V Architecture
Located at Bushwick Inlet Park, on the Brooklyn waterfront, The Tanks is a real proposal for New York, that radically reimagines what a public park in the 21st century can look like. Nestled against a rare green inlet on the East River, the Bayside Oil complex features ten empty oil tanks that have been empty for half a century. Each tank is unique and the design vision adaptively reuses the majestic structures as community gardens, performance spaces, galleries, and environments for natural habitats. The overall park will feature public green space, play areas, athletic facilities, plus an ecological inlet with native species and community boating. Joining the design is a non-profit dedicated to re-growing the devastated oyster population in New York Harbour. The project is a collaborative and entirely pro-bono effort, that involves community groups, city agencies, and the Mayor’s office.

Re-use winner: Badaevskij Brewery Redevelopment by Herzog & de Meuron and APEX Project Bureau
The aim of the Badaevskiy Brewery project is to redevelop the six-hectares old factory area, between the Moscow River and the vector to Minsk, and to transform this famous but largely abandoned and rundown site into a vibrant destination point in central Moscow. The factory grounds and river embankment are to be opened to the city for the first time; the old industrial structures are to be assessed, restored and brought back to life through new internal organization and uses, and more than 100,000m² of new residential, office and retail is to be added in order to rejuvenate the site. The new development will comprise three renovated existing historic buildings and a new ‘horizontal skyscraper’, sitting on a series stilts, elevated 35m above the ground. This new structure brings a series of benefits, such as additional green space, retaining the connection between the existing buildings and the river, and the prime views of Moscow from the flats within the hovering structure.

Smart Cities winner: X-Space | Urban Fabric Regeneration by Verform
This concept for an urban regeneration project in Dubai aims to create a new ‘urban living room’, based along a 1km section of the emirate’s main highway, Sheikh Zayed Road. The human-scale space is geared towards pedestrians rather than vehicles, and is designed for all cultures to congregate. The urban intervention is a response to the problem of the highway breaking up the fabric of the city. It is designed to give back public realm, along with sustainable green areas, to encourage diversity, integration and tolerance. The project’s aim is to reduce the use of cars, with cycle paths, public transport and light-weight vehicles. The design is across a ground level of open spaces and gardens and an upper level with workplaces, restaurants and a gym, both centred around an indigenous Ghaf tree, symbolic of stability and peace.

Cultural Identity winner: City Rail Link Ltd by Jasmax + Grimshaw
City Rail Link (CRL) is a major future transport infrastructure project that will extend Auckland’s rail passenger network for the city. It is also New Zealand’s largest public art project. The project consists of two underground rail tunnels connecting three new stations to a reconfigured downtown area. The project is designed to be a powerful expression of indigenous cultural identity, reflecting Auckland’s unique identity as the largest Māori and Polynesian city in the world, and to create an authentic and globally recognisable image of the city for the future.  The design is firmly rooted in the Māori Creation Story, and each new station will be identified by a unique artwork, representative of a Māori deity and inspired by the historic landforms and flora characteristic to each station site.

Ethics and Value winner: The School in a Park by Maisam Architects & Engineers
The proposal for the new united school campus for The Ahliyyah School for Girls and The Bishop School for Boys, joins two of the most prominent schools in Amman. Maintaining the strong local identity and values of each school was crucial to the design. The proposal consists of a series of elevated learning pods, rooted by pillars within an interactive park, providing a sense of openness, community, creativity and innovation throughout the campus. The design approach embodies a fresh take new on the architecture of schools, embracing a flexible use of space to adapt to the changing nature of education. In addition, the campus offers a learning environment that feels like a second home for students, whilst consolidating the cultural identity of both schools.

Power and Justice winner: Prison Haren by Cafasso NV with B2Ai / EGM Architecten
The new Haren prison situated near Brussels is due to be operational in 2022 and, with 1190 detainees, will be the largest but also the most ‘humane’ prison in Belgium. The design of the new prison is based on normalisation, rehabilitation, and reintegration. Its free standing and modest building volumes represent as radical departure from the standard panoptic or star-shaped prison floor plan. The complex consists of eight buildings that house three men’s prisons, two women’s prisons, a forensic psychiatric centre, an observation unit, workshops, sport infrastructure and a number of communal facilities. The campus has been designed as a small village that functions autonomously but integrates into the surrounding area. The buildings are designed on a human scale: the community building is reminiscent of a town hall or administrative centre, while the prison buildings are designed as multi-family houses.

Ageing and Health winner: Pars Medical and Health Centre by New Wave Architecture Studio
Pars Medical and Health Centre is set to accommodate the large number of medical tourists currently traveling to Iran for medical services, due to the facilities available and the skilled health workforce. In addition to offering services to the local population, the objective of the project is to provide international services especially to Iran’s neighbouring countries and countries along the Persian Gulf. The proposal is for a combined 250-bed hospital, hotel, cancer institute, rehabilitation centre, dermatology clinics, spa and commercial healthcare centre. The project is designed to be constructed in different phases, starting with the hospital, as the main income generator for the following phases of the project. Responding to local vernacular, the design features a series of staggered, cantilevered structural rings, with open space at the centre. As well as helping to achieve efficient energy consumption, the design offers wide vistas, natural daylight and direct access to green space for patients.

Building Technology winner: Skypark Business Centre South by Aravia Design & +FUN
This business centre for the development of Luxembourg Airport aims to promote both sustainability and work-life balance for the transient worker. The complex is defined by a semi-transparent louvred skin that acts as both a sun shading device and acoustic barrier, as well as promoting passive ventilation. Aesthetically the façade adds complexity and depth to the building elevation. Natural light penetration is another key element of the project, which features a controlled building depth, and voids that allow sunlight to reach even the lowest basement level. The project incorporates public spaces and facilities that add value for the surrounding public realm and contribute to an active work style.

Climate, Energy and Carbon winner: MO(O)D A Prototype for an Office Building by SOS School of Sustainability
In this proposal for a future office in Changzhou, China, meeting rooms and workplaces are supported by a constellation of open, flexible and multi-functional spaces, designed to promote both wellbeing and productivity. The proposal creates a hybrid environment, where meeting rooms and workstations constitute only 30% of the masterplan, while 70% of the space is dedicated to breakaway space. The project has been driven by an analysis of climate trends, research into innovative and sustainable building materials, the local cultural environment, and the future of the workplace. The final product is a synthesis of tradition and technology, shaped by both the local environment and needs of the population.

For more details on the WAF Awards and the festival please visit: www.worldarchitecturefestival.com @worldarchfest #WAF19 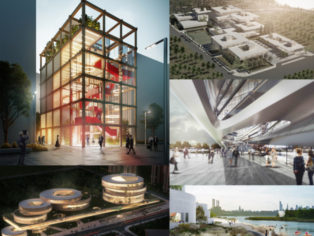 Clockwise: MO(O)D A Prototype for an office building by SOS School of Sustainability; The School in a Park by Maisam Architects & Engineers; Skypark Business Centre South by Aravia Design & +FUN; The Tanks at Bushwick Inlet Park by Studio V Architecture; Pars Medical and Health Centre by New Wave Architecture Studio 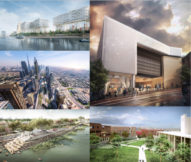