Ventilation meets the requirements… or does it?

Manufacturing approved products to protect the building envelope, Cavity Trays Ltd is the longest-established UK company in its specialised field and the only UK cavity tray manufacturer awarded European Technical Approval. Cavity Trays also manufactures a range of ventilation products, and one of the most popular is called a Cavibrick.

The Cavibrick is a moulded ventilator which is brick-sized and used instead of a traditional airbrick. Cavibricks have integral louvres, deflectors and an internal back upstand to guard against water ingress.

Contrary to appearance, the number of traditional airbricks photographed actually provide far below the minimum under floor ventilation requirement demanded.

Each airbrick has two rows of 9 square 8mm x 8mm apertures, so each airbrick has an airflow rating of 1152mm². To achieve compliancy, a high airflow airbrick is commonly essential.

In comparison, a Cavibrick has an airflow rating of 7,500mm² – over 600% greater than the airbrick shown in the photograph. (When considering airbricks, what first appears to be adequate may not be – always check the airflow rating marked on the product)

Airbricks should also be 150mm minimum above ground level, whereas those photographed are too close. (Puzzlingly, the rendering has also been taken down to ground level, bridging the edge of the horizontal DPC in the outer leaf, which already shows the tell-tale signs of ongoing capillary dampness and is likely to deteriorate rapidly as the building ages).

Difficulties in maintaining the correct relationship between ground, DPC and flooring levels can be overcome with the use of preformed Cavisleeves and Caviducts. Additionally, where the cavity wall also incorporates a perimeter gas barrier, it is possible to ventilate gases from under the structure/barrier level, to Cavibricks located above the perimeter barrier levels. Easy compliance with correct distances maintained above ground level. 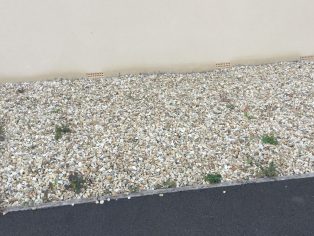 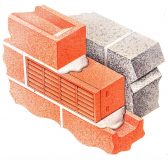