Mark Schofield, a VEKA employee who also serves in the Army Reserve has been commended for his Distinguished Service as part of the United Nations Peacekeeping Force in Cyprus.

The reserve chef was among a select group of 15 from a company of around 250 to receive the certificate from Commanding Officer Lieutenant Colonel Royce. The award comes before Army Reserves Day (21st June 2017), which highlights and recognises the invaluable contribution made by reservists, and sees them wearing Armed Forces uniform at their ‘regular’ places of work.

During Mark’s recent tour of Cyprus – his third – representatives of The VEKA UK Group joined other employers invited by the Army to learn about reservists’ military work and how it complements their ‘everyday’ roles. Operations Director Paul Armstrong attended the four-day trip for The VEKA UK Group, which has held ‘Investors in People’ status since 1994, and proudly supports its staff with training and other opportunities.

The UK Army’s role as part of The United Nations Peacekeeping Force in Cyprus (UNFICYP) is Britain’s longest running overseas mission. Ownership of the island is disputed between the Turkish north and the Greek south, with the UN patrolling a Buffer Zone or ‘Green Line’ across the capital, Nicosia.

The visitors followed a packed itinerary, including talks at the hotel and the UN base; training activities from the Joint Services Adventure Training scheme (a week-long course run in Cyprus for Army, Army Reserve, RAF and Navy service people); and tours around the UN-patrolled area.

“The effects of the conflict on the island are clear, with crumbling buildings and abandoned vehicles, many peppered with bullet holes. Some buildings have been repurposed, such as The Ledra Palace; once a five-star hotel that hosted Richard Burton and Elizabeth Taylor but now a base for troops within the buffer zone. Others remain ‘time capsules’, such as Nicosia’s abandoned airport, or the deserted car showroom – still stocked with dust-covered 1970s Toyotas!”

Mark has worked for both the Army Reserve and VEKA for around 23 years, now serving as a chef in The 4th Battalion, The Duke of Lancaster’s Regiment after 12 years as an infantryman. Paul continues:

“The rapport that Mark has with his colleagues is great. He’s particularly valued as a chef – in fact, one soldier described food as ‘the morale of the troops and the most important thing, next to pay!’”

Besides their peacekeeping duties in Cyprus, reservists pick up skills that benefit both their Army and civilian work. Operating in arduous conditions, thinking on their feet, taking on responsibility, and assessing risk are among the challenges that reservists face, developing their confidence in the process.

Austerity measures have seen regular Army numbers reduced from 104,000 to 82,000 in recent years, offset by an increase in reservist capability. It’s planned that there will be a total of 30,000 reservists by 2019 (currently there are around 24,000), with larger employers such as The VEKA UK Group needed to support their staff in taking up such roles, and offering jobs to retired service people.

“After gratefully being given the chance to learn more about Mark’s military work, it’s clear to see why VEKA will long continue to support the Army in this way. It’s an invaluable service with benefits for all parties involved, and we’re proud to see Mark commended for his efforts 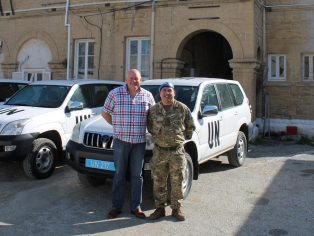