The first phase of work on a pioneering new sports centre for the University of Oxford, which features the UK’s first LED lit glass sports hall surface, has been completed and handed over to the university.

The innovative playing surface allows the marking lines for a variety of sports to be switched on individually via a touch screen, making it much easier to identify the boundaries of the court or pitch. The surface, produced by ASB Glassfloor, can cycle between markings for badminton, basketball, futsal, handball, korfball, netball and volleyball, in a range of combinations.

The Acer Nethercott Sports Centre is a new addition to the university’s iconic Iffley Road Sports Complex, the scene of another ground-breaking first, which took place back in 1954 – the breaking of the four-minute mile by Roger Bannister.

Subsequent phases of the masterplan include further development of the sports complex to include an additional sports hall, new activity rooms, dojo, fencing sale, squash courts, redevelopment of the grandstand with cricket nets and projectile room, and improved support for the athletics track. The phasing of the works has been carefully structured to minimise any periods of shutdown of the facilities.

The new Acer Nethercott Sports Hall is clad internally with grey stained ﬂush timber veneered panels, with integrated acoustic treatment to the higher levels. The scoreboard, store access doors and glazed entrance screen have been carefully integrated to maintain a flush aspect to the interior. The transparency of the glazed entrance screen provides onlookers with a visual connection to the activity within, encouraging participation.

Motorised divider curtains integrated into the suspended ceiling allow the space to be quickly sub-dived into smaller areas, each with individually assignable LED markings, allowing the ultimate in sports hall flexibility. Natural ventilation in the form of roof mounted wind catchers contribute to the facilities low energy cooling strategy. Longitudinal roof lights provide natural daylight into the sports hall, contributing to the wellbeing of those active in the space. 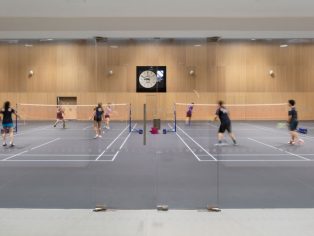