Farnborough College of Technology is located next to one of the main roads out of town. It is under the flight path to the local airport.

Most of the buildings on the campus were designed in the 1980s by the late RIBA Gold Medal Winner Sir Colin Stansfield-Smith and his team at Hampshire County Council. They are arranged around a central pedestrian street at right angles to the road, but they were concealed behind a belt of trees and some low grade older buildings.

NHA were appointed in 2014 to design a new building to replace the old ones at the front of the site. The purpose of the building was to act as a study centre, particularly for students studying for university degrees, and to house the College library. It was also to establish the presence of the College as seen from the road with a striking building which would form the main entrance to the College.

The design concept exploited the diagonal route from the main direction of approach in the corner of the site, through to the start of the existing pedestrian spine. This was dramatised using gently sloping roofs, with opposing slopes on each side of the diagonal route, so that the form of the building recalls two slices of cake arranged opposite each other with projecting points. The project points themselves contain the escape stairs from the first floor of the building. Externally, they help to form protected areas at either end of the building. At the north end, this is the main collecting point for visitors and at the south end, it forms the outdoor terrace for the café, shaded by existing trees.

Internally, the diagonal route is naturally lit by sloping rooflights, and it is lined on either side by circular steel columns, which echo those of the 1980s pedestrian street. The main structure is formed of steel columns and beams, with visible cross-laminated timer (CLT) forming the first floor and roof.

“Nicholas Hare Architects embraced our vision for the building and worked with endless enthusiasm to give us the building we had asked for.” 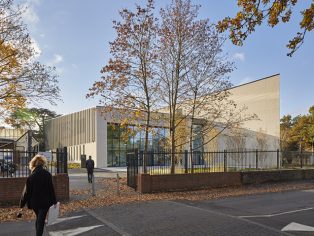