Air handling and heat recovery specialists Air Design are helping to ensure that visitors to a brand new attraction get the full experience in a heritage centre built to commemorate one of the most famous battles between the Scots and the English.

The Battle of Bannockburn visitor experience was developed as a partnership project by the National Trust for Scotland and Historic Scotland. It opened in March 2014, just a few months before the 700th anniversary of the battle on 23-24 June; a battle that changed the course of history for Scotland.

The main focus for the centre is a 3-D simulation of the 1314 battle between the forces of Robert the Bruce and King Edward II, with a virtual environment allowing visitors to lead their own division of medieval soldiers in a dramatic battle simulation. No distractions were wanted from the fully interactive visitor experience so, when specifying the air handling units (AHUs) required for the centre’s HVAC system, Mechanical & Electrical Contractors FES stipulated low noise as a fundamental requirement. Based in Stirling, just minutes from the location of the new Centre, FES sourced two AHUs manufactured by Air Design supplied through Scottish distributor Ventilation & Heating Sales (VHS). Neil Grant of VHS comments:

“Obviously the performance of the units in maintaining a comfortable environment for the visitors was important, but on this job the quietness of their operation was a crucial consideration.”

The two units feature a single phase AC backward curved fan, selected as it is one of the quietest fans available, with 45mm double-skinned panels, mineral wool infill and silencers to further enhance noise reduction from the HVAC’s ducting. As the units were fitted in the centre’s floor voids rather than being ceiling mounted, low profile models were supplied.

The Battle of Bannockburn is recognised as a pivotal point in Scotland’s history and the development of the new attraction, located on the spot where Robert the Bruce planted his standard and gathered his men to fight the might of the English army, was timed to coincide with the 700th anniversary in June. Inspired by traditional Scottish architecture, the centre has many features, including the opportunity to meet Robert the Bruce and King Edward II in 3D in the ‘Prepare for Battle’ room on the eve of the battle before being led into battle by one of the centre’s ‘Battlemasters’.

Air Design offers a wide ranging service to the building services sector, with its own dedicated manufacturing facilities in the West Midlands, in-house technical expertise and a workforce with many years’ experience in providing air handling and heat recovery solutions. 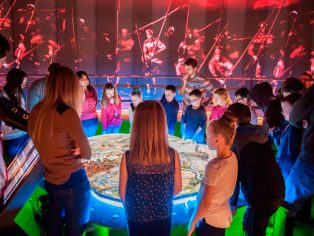