Laing O’Rourke has been appointed to deliver Two St Peter’s Square, a new landmark office building designed by SimpsonHaugh and Partners. Located in Manchester City centre, this 12-storey project is the latest addition to the regeneration of the city’s Civic Quarter. Clearance of the site started in November last year and completion is due in January 2017.

The exterior of the building will include a signature-pattern that references the city’s industrial and civic heritage. A grid of four independent designs, inspired by regional heritage and civic icons such as the Lancashire Rose and the cotton flower, are mirrored and rotated on two façades to create a free-flowing motif that spans these elevations. The pattern also directly relates to the staircase in the Manchester Town Hall Extension, a project recently renovated by SimpsonHaugh and Partners, which is located opposite. The façade build-up comprises a double layer that allows light to permeate through the patterned exterior to glass behind. Floor-to-ceiling windows open up views of the square, while the patterning provides shading to the offices within.

The service cores of the building are located to the rear of the floorplan to create large open-plan offices of 18 metres clear span. The glazed façade maximises natural light infiltration whilst the column-free environment enables a highly adaptable workspace.

Reconstituted Portland Stone is used externally in reference to many of Manchester’s historical buildings including the Central Library, which sits close by. Inside the building, rich natural materials such as stone, hard wood and bronze create a feeling of warmth. The arrival sequence facilitates movement from the large-scale square, through a sheltered colonnade, into a calming reception area.

The height of the building has been carefully considered in relation to other recently completed projects in the area. Sitting slightly lower than its immediate neighbour, One St Peter’s Square, Two St Peter’s Square mediates the change in height and scale between the existing listed buildings and the new developments in the square. In addition, it reinforces the context of the site as a major public square, which is also set to become an important hub for the city’s transport network with the creation of the second Metrolink City Crossing and associated interchange.

Two St Peter’s Square demonstrates the ambition of the client, Mosley Street Ventures Limited, to create a lasting legacy for an important site with a carefully considered project that acknowledges both the area’s past and its exciting future. 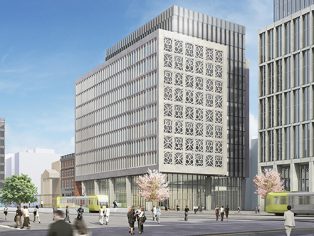